According to a report by Reuters, Sony Corp will name Kazuo Hirai as its new President as early as next month during its board meetings.

Official duties as President will start for Hirai in April, with Howard Stringer staying on as CEO and Chairman. 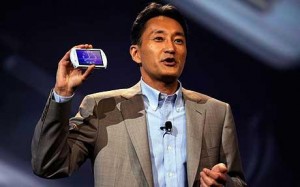 Hirai comes to the new roll having served as the head of consumer businesses and is credited with bringing Sony into gaming prominence. Stringer on the other hand has struggled to bring Sony success with tablet devices and had a complete nightmare on his hands with the PSN hack last year that has left a black eye on the company ever since.

Recently, Kazuo Hirai has been responding reports of falling sales of its new handheld PlayStation Vita, defending its price point as Nintendo dropped the price of its 3DS product in response to its launch:

There is no need to lower the price just because somebody else that happens to be in the video game business decided that they were going to lower their price.

Hirai will be tasked with bringing Sony’s groups together to showcase them as a whole, as the fragmented company has had difficulty keeping up in mobile as well as gaming.

This will most certainly be a hot topic at this year’s CES conference in Las Vegas, and our team will be on the ground covering the action for you.