For London-dwellers, there’s plenty of good transport apps out there to make sure you don’t get lost en-route through the gargantuan metropolis. There’s the slick Citymapper for starters which serves up a pretty comprehensive arsenal of data for your journey, while the functional London Bus Live Countdown does a good job too, though focuses solely on buses. Oh, and let’s not forget about Google Maps either.

Now, however, a new app called Jump has launched for iPhone and iPod touch, courtesy of developers Noble Union, which as previously worked on apps for BBC News, Toptable (now OpenTable), among others.

Perhaps the most striking thing about Jump is its interface and general usability. It’s clearly not been cobbled together – a lot of attention has been given to design detail here.

As with similar apps, Jump shows you bus stops in your locale, letting you tap and scroll horizontally to find the bus you want.

You can also track the progression of buses as it traverses, and set alerts for when it’s due to arrive.

You can click to peruse all the stops on a route too, while a neat swiping action removes a particular ‘stop’ from your screen and returns you to the main map.

Additionally, if you use specific stops more often than others, you can ‘star’ these to add to your favorites, while a manual search also lets you find any destination in the UK capital.

There are other similar apps out there, but Jump is beautifully designed, and should go down well with commuters and visitors alike. Of course, if you travel by train or underground too, then you will be better off with something like Citymapper, but if you’re a bus-addict, well, Jump could be your guy.

‘Not another bus app’

“When we started working on Jump, we didn’t want to make just another bus app,” explains co-creator Ryan Shelton. “I wanted to push the envelope and make what is essentially boring data more beautiful. Clear by Realmac Software is a great example of this – they took the simple to-do list and made it absolutely beautiful. In a similar vein, Jump utilises a totally fresh approach to displaying bus times by wrapping this data around a tactile, almost game-like, user interface. There are a number of useful features we’d like to add to Jump in the future but we’ve kept things super simple for version one.” 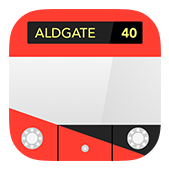 Though it is certainly a London-focused app, it’s available in App Stores globally, allowing those planning a visit to download it in advance. And longer term, there are plans to roll this out to include other cities, while an Android version is on the radar too.

Though there is a free version of Jump, an in-app purchase of $1.99 will get you bus reminders, unlimited number of favorite bus stops and additional themes to change the look of the app.