Banco Santander, the largest bank in the euro area (and one of the largest in the world) based on market cap, has pumped more than 5 million euros – approximately $6.6 million – into Swedish mobile and social payments startup iZettle.

On a more local level, iZettle also announced a partnership with Santander UK – the Spanish commercial and retail bank originally entered the UK market in November 2004.

iZettle is one of the Square-like startups duking it out in the European market, in particular with the likes of SumUp, payleven and PayPal.

Its solution enables merchants in a range of European countries to accept card payments on tablets and smartphones.

iZettle’s iOS and Android apps for accepting credit card payments is available for free in the UK, Spain, Germany, Sweden, Denmark, Norway and Finland and, the company promises, coming soon to more countries. 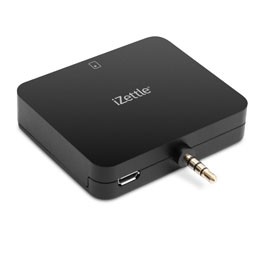 Its Chip & PIN and Chip & Signature card readers can be purchased on the iZettle website.

Prices for the physical card readers depend based on region and whether or not there’s transaction credit included.

Ramón Tellaeche, an exec at Banco Santander, commented on the strategic investment and partnership deal thusly:

Millions of small business owners and professionals in the markets where we operate need an alternative to conventional credit card terminals, and simple software to manage and analyze their transactions.

We are strongly committed to innovation that satisfies emerging needs of our customers, we believe iZettle’s innovative mobile technologies will be crucial to those merchants’ near and long term success.

A telling endorsement, especially coming from one of the largest banking groups on the planet.

We want to bring iZettle to the world, and to do that we must have strategic partnerships with the world’s leading banks. Our relationship with Banco Santander is central to our transition from local to multinational services.

Headquartered in Stockholm, iZettle has raised tens of millions of dollars from Index Ventures, Greylock Partners, Creandum, Northzone, MasterCard, American Express and SEB Private Equity since it was founded in 2010.

Meanwhile, its chief rivals are keeping busy, too. SumUp just announced that it raised a ‘double-digit’ million euro sum from Groupon and American Express, while Rocket Internet-backed payleven touted partnerships with MICROS and Apple.