This article was published on September 30, 2013 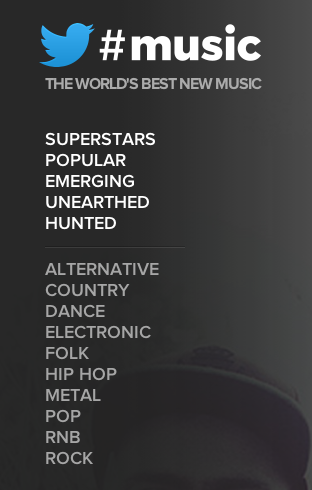 For the longest time my older brothers would ask what music they should be listening to. They’re all ten years older than me and seem to think I’m clued up on what’s hip and happening (do people still say hip and happening?) but as I’ve gotten older, I’ve done my best to avoid asking nephews and cousins about what I should be listening to and have aimed to find my own way.

Until recently, after various attempts, I settled on a great Spotify App called Tunigo to find great new music. It’s very good. So good in fact that Spotify ended up acquiring the app for itself.  Its primary benefit wasn’t truly discovering new music however, but rather manually compiling music for different tastes, moods and experiences – old music and new.

I still needed a way to find out which new tracks were being listened to by the mainstream AND those in the know, released by popular artists, up & coming artists AND new artists. Tracks that weren’t being played on the radio and backed my millions of dollars, but were being listened to by a passionate group of music aficionados and perhaps slowly but surely gaining popularity in the mainstream. Essentially, I wanted a way to discover great new music, irrespective of whether the artists were signed to a big label, small label or were completely independent. 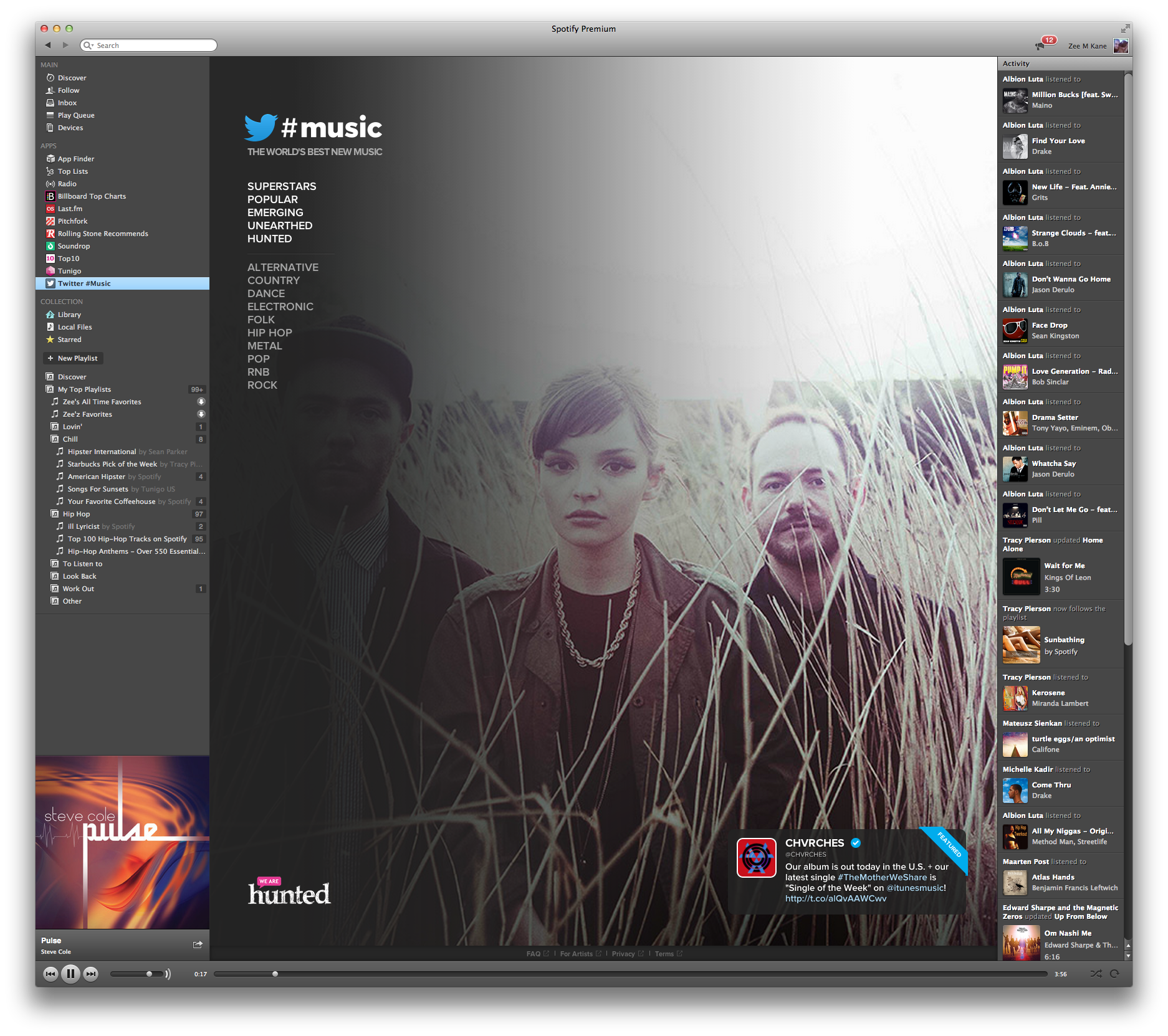 After somewhat of a false start with a Web app that clumsily worked with Spotify and Rdio through the browser (which still exists, in fact), Twitter #Music launched a fully-fledged Spotify app and soon after, added integration with Rdio too, making the experience far more streamlined and user friendly.

In no uncertain terms, within about two weeks, Twitter #Music’s Spotify App has now become my de facto route to discovering new music. Rdio also includes all of Twitter’s chart playlists but not quite as elegantly integrated, in my opinion.

Whilst maintaining a clean, simple and highly visual user experience, Twitter has selected a number of well thought out categories to help you discover new music:

If you’re interested in listening to just one genre of music, that’s also possible too. However what you’ll find (and this is where Twitter #Music has room for improvement) is only the most popular tracks within each genre. This can often not change all that much for days or even weeks. I’d love to see similar ‘superstars, popular etc.’ charts for each genre.

Where Twitter also has room for improvement is providing more room for filtering music from specific trending lists. There’s absolutely no way I’ll ever intentionally want to listen to a Chris Brown track for example, same goes for country music and opera. It would also be smart to include an option that excludes songs that a user has listened to more than 5 times, let’s say. If Twitter is aiming to become the way to discover the best new music, these little features would help. Ensuring Twitter #Music doesn’t become a bloated piece of junk is also of paramount importance.

One feature I would also love to see is insight into what specific countries are listening to. I’ve always loved Brazil’s taste in music for example, show me what’s trending there. Similarly, the Middle East’s music taste has always had a great flavor to it, I’d love to know what’s popular there. Its tag line is “The WORLD’s Best New Music”, give me the world!

The requirement to have Spotify or Rdio can be frustrating for some but for a devoted Spotify user – and if you aren’t you should be! – it makes it all the more attractive.

Twitter #Music’s mobile app is also not so great at the moment but thankfully you can essentially ignore it by saving all of Twitter’s lists as playlists in Spotify (even for offline mode) so they’re accessible anywhere.

All in all however, the issues and feature requests are minor tweaks that won’t keep me from using the service in its current form, far from it, I’m actually very impressed with Twitter #Music… Which is really why I’ve been baffled at the lukewarm (at best) reaction from press and Twitter users alike. You’d be hard pressed (and believe me I’ve hunted around) to find anything remotely as powerful to discover great new music. It’s only a matter of time before Facebook and Google+ make their move in this space and I can’t see them getting anywhere near Twitter’s levels of authority.

How do you find new music to listen to online? And have you tried Twitter #Music? What do you make of it? If you haven’t, it’s free, try it now (ideally with Spotify and Rdio) and come back and share your verdict.