Between Apple’s App store, Google Play and BlackBerry, 2.7 billion app downloads occur per month—and a recent study from Deloitte showed that of surveyed global consumer/health care apps, a mere 20% are downloaded more than 1,000 times. The gaming market’s cluttered, and to expect people will just come to any branded app is misguided.

Unless you’re Loren Brichter. The famously private Tweetie creator who also honed Twitter for iPad and mastered interface paradigms left Twitter in 2011, “Taking some time to figure out what’s next”. “What’s next,” of course, was Letterpress, “the deceptively simple and visually striking word game” that debuted last fall to rave reviews.

Months later, Brichter remains tight lipped on his work, including his allegiance with Apple and whether Letterpress will come to Android or BlackBerry. But he did speak with me about why Letterpress has clicked, the role of beauty in gaming and how the little word game that could fulfills his goal to “make fun and useful things.”

When Letterpress first launched, you said you wanted your first post-Twitter project to be “fun.” In a sea of word games, what does Letterpress do differently?

I’d like to think that Letterpress stumbled onto this nice blend of fun, skill and strategy. There’s a territorial element that is unique, and I’m continually delighted by how cool that turned out.

You also said your ultimate goal is to “create fun [and] useful things”. How does Letterpress fulfill both goals?

Letterpress is definitely on the fun end of the spectrum. It’s useful to me in other ways, mainly as an experiment, and a testbed for new ideas and technologies.

From Letterpress to Tweetie, you have a history of creating beautiful content. How does beauty enhance audience engagement?

Beauty is so much more than skin deep, the style of the game is more than a veneer — the design, interaction and implementation were all grown together, informed by each other. Maybe people notice it, maybe they feel it subconsciously. I’d like to think it helps, but even if it didn’t I’d still build things that way because it seems like the right way to do it.

When we spoke to you last autumn, you told us most of your post-Twitter ideas would never come to life, but some—like Letterpress—might slowly surface. How have these ideas developed since then?

I’ve pushed out some great updates to Letterpress, and I’m slowly defrosting some of those other ideas. Hopefully they will come to life soon!

Do you have a long term strategy for Letterpress, or would you rather let users dictate its future?

Both! There are already some great features from users in there, and even more on the to-do list. I’d like to keep it pretty simple, but there’s still plenty of room for it to grow. 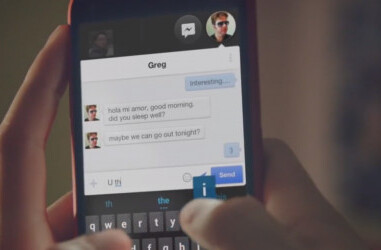