The last few years saw Ireland not only struggling in efforts to recover its economy, but also becoming a popular destination for major US companies that want to put on a bridge to Europe. Likes of Facebook, Google, and Twitter have created a huge number of jobs in Dublin, making it a significant European technology hub.

In addition to that, a closer look shows that there are quite a few European founders going in the opposite direction by choosing to establish their startups in Ireland instead of their home country. The reason here is that Ireland not only supports its own startups as any country should, but also is very effective in selling Dublin as a startup destination for foreign entrepreneurs. 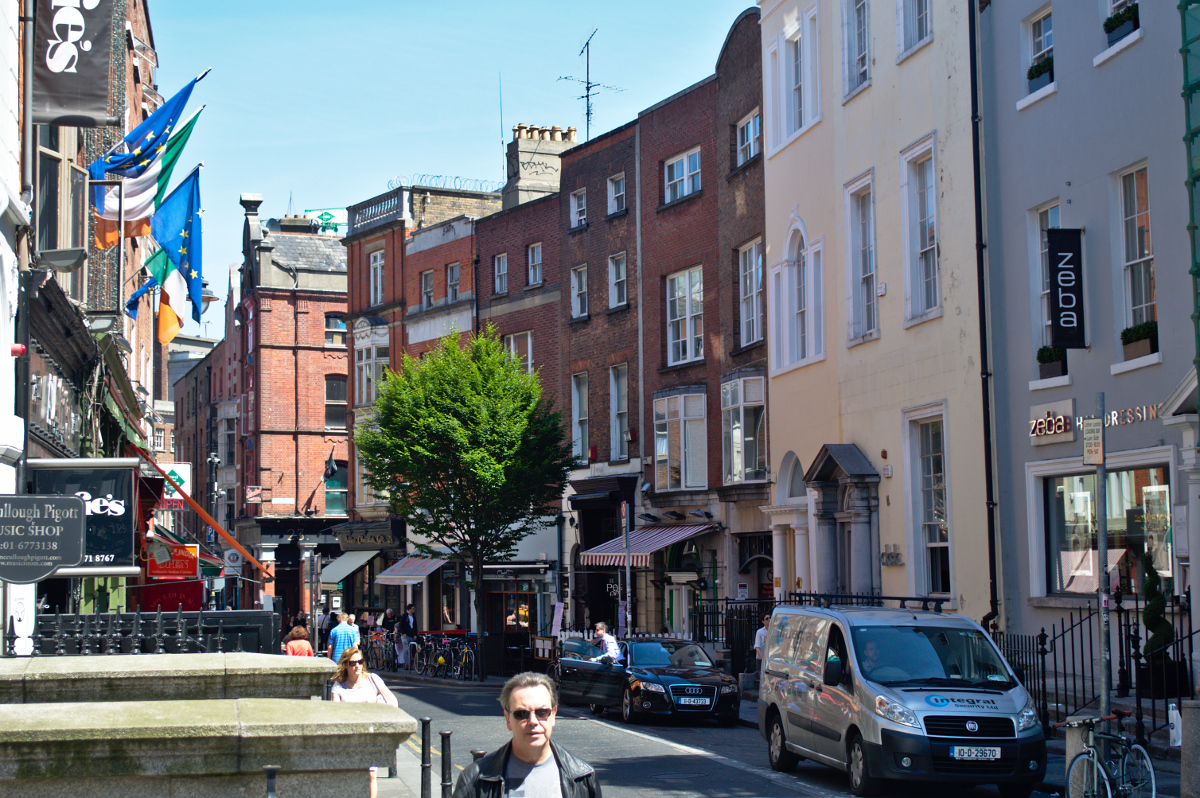 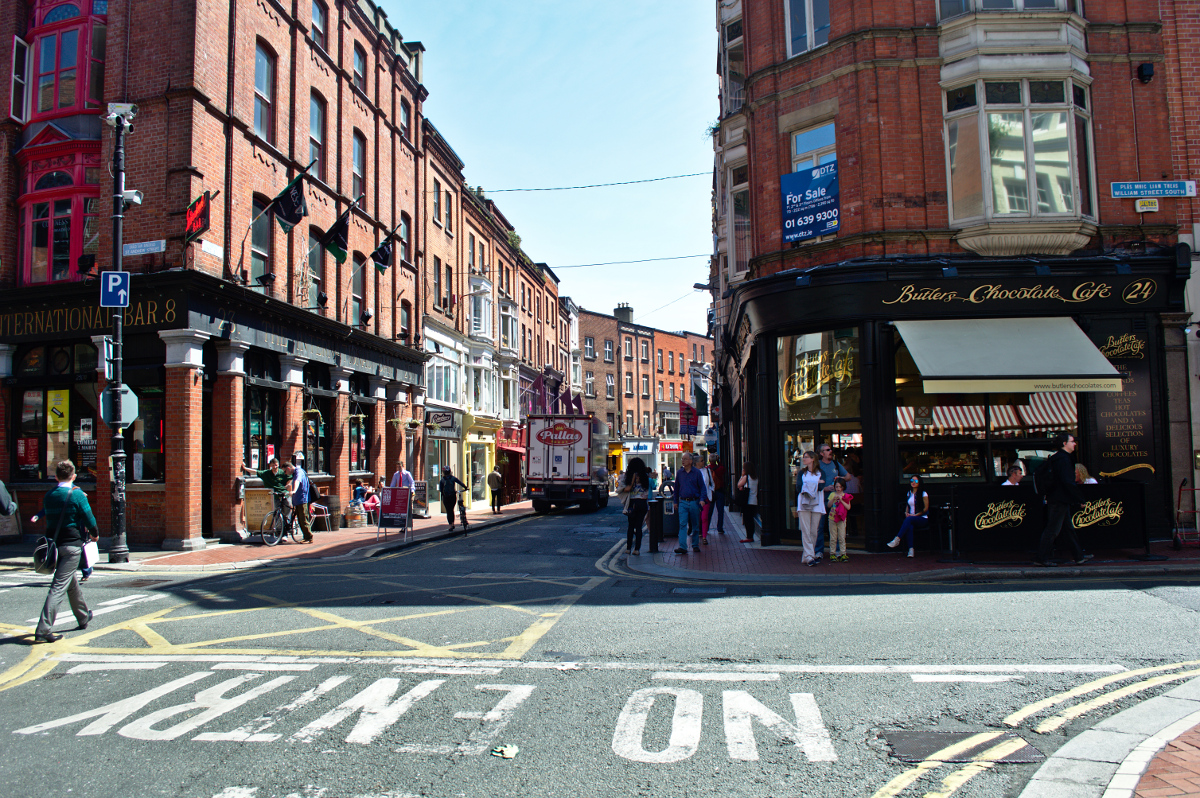 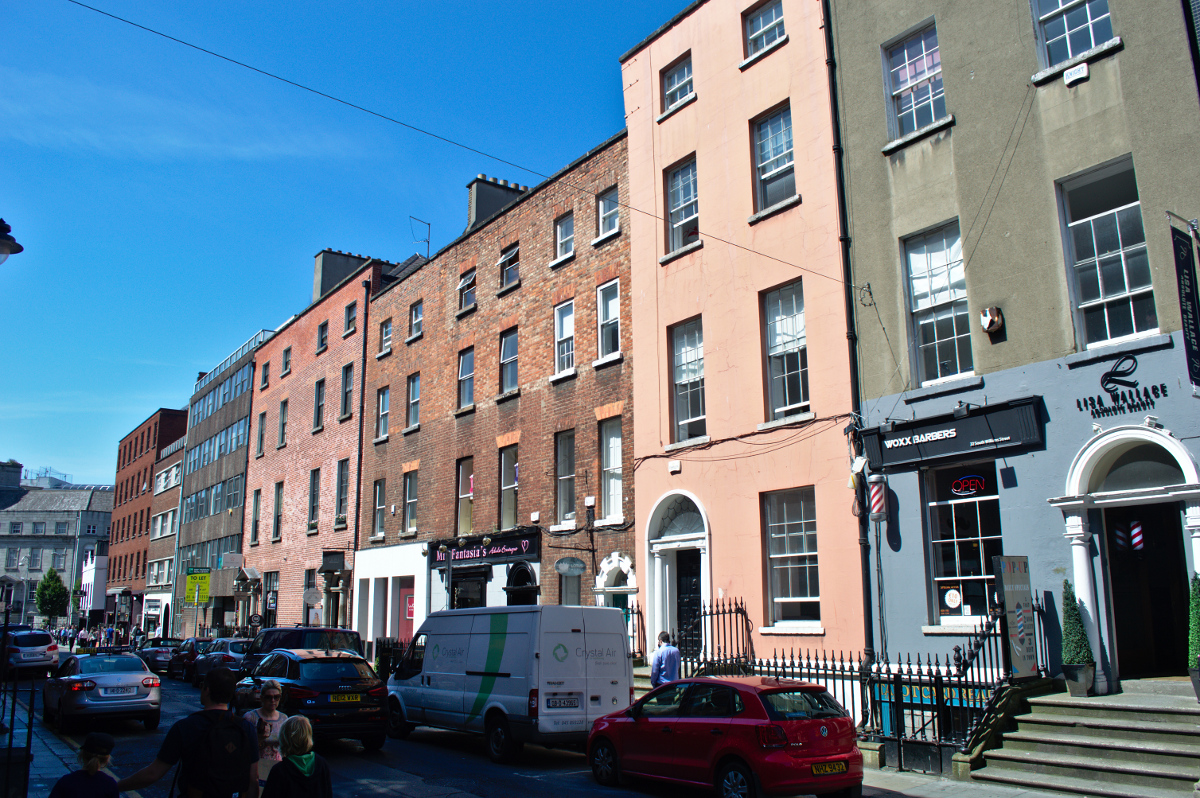 The government plays a big role here. Most credit for the development of the tech entrepreneurship community in the country goes to two sister agencies, IDA Ireland and Enterprise Ireland (EI). The first one is attracting foreign companies like Facebook or Airbnb to the island, while the second works with domestic startups, helping them to scale internationally.

Favorable tax rates are often cited as a major reason for tech companies coming to Ireland but that’s not necessarily the most pressing concern for a startup in its earliest stages – it’s more a draw for big international names.

Although the areas of responsibility of IDA and EI seem perfectly clear, there is one project that kind of belongs to both, but works under the EI jurisdiction. Called Start in Ireland, it is responsible for attracting foreign entrepreneurs — and not without success.

“I don’t think there’s any difference between being a foreigner or being Irish in terms of starting a company here and getting the support to do so,” says Alex Passant, French-born researcher and founder of Music & Data Geeks, building music discovery solution seevl.fm.

“EI did a very good job of selling Ireland to us,” agrees Erik Winther, founder and CEO of Danish startup Golf Metrics, the team of which is slowly but surely relocating to Ireland.

It might come as a surprise, but initially Start in Ireland had a goal somewhat different from what it’s doing now.

“The idea started about three years ago. It was at the time when the economy here was struggling,” said David Scanlon, Project Executive at EI and the one in charge of Start in Ireland. “And we thought — how can we take advantage of the huge Irish community outside of Ireland? [Our message to them was] ‘now it’s the time for you to pull on the Irish jersey and do something for your country.’ The idea was to offer them to come to Ireland and launch a startup here.”

With dozens of millions of Irish people living outside the country, it totally made sense to turn to them and make them useful. It turned out however that at the time many of non-Irish founders were also interested in starting their business on the Emerald Isle.

“It came to a point when we were getting more inquiries from non-Irish than from Irish entrepreneurs without us deliberately going out to find those people,” Scanlon recalls.

Being flexible enough to adapt their offering for eveyrone in the world, Start in Ireland brought to the country 27 projects in the last two years, of which only about half have at least one Irish founder. The other half comes from “places where it’s challenging to be an entrepreneur” like Spain, Portugal, Italy, Central and Eastern Europe, and the ex-USSR countries.

“We’re looking to find startups that can scale in Ireland to at least 10 jobs in two to three years,” Scanlon explained.

For its protégés, Enterprise Ireland offers all the information that a local entrepreneur has to know, as well as about expat stuff like house hunting, bringing a car from abroad, hiring lawyers and accountants, etc.

In addition to that, EI operates a seed fund that can inject €50,000 (around $68,000) for 10 percent in startups at early stages. For later, there is the High-Potential Startup fund that invests in local startups alongside other funds, VCs, or angels.

But what seems to be even more valuable is that the newly arrived entrepreneurs are connected to Dublin’s tech ecosystem, which is characterized by startups of exactly of the right size.

“In Ireland, everyone seems to know everyone, you’re always two conversations away from the right person.”

The relocated founders TNW talked to speak in one voice when praising Dublin’s tech entrepreneur community and its importance for startups at early stages.

“The community aspect is just as important as governmental support,” explains Simon Dempsey, Irish-born entrepreneur who moved back to the country after 10 years of living in the UK with his startupLikeWhere. “You can have a peer-to-peer conversation with somebody who’s at the same stage with you or further ahead, and they can help you navigate the market and work with customers.”

Connecting startups to one another is also among the main tasks of EI and Start in Ireland, together with the ultimate goal of helping the country’s economy to thrive again.

“We’re making the community here more diverse, creating new connections and building new relationships,” said Scanlon. “As an example, we have a Polish founder here, and when an Irish company wants to go to Poland, we can use him as a resource for that company. He knows the market, and he can make direct introductions and recommendations. So, we create new jobs and help Irish companies to succeed abroad.”

Among other activities of Enterprise Ireland are study grants for teams of promising projects. One of them, DIY-oriented startup Guidecentral founded by Argentinian entrepreneur Gaston Irigoyen, is going to spend the grant to fund its participation in the US discovery program for founders, Blackbox Connect. 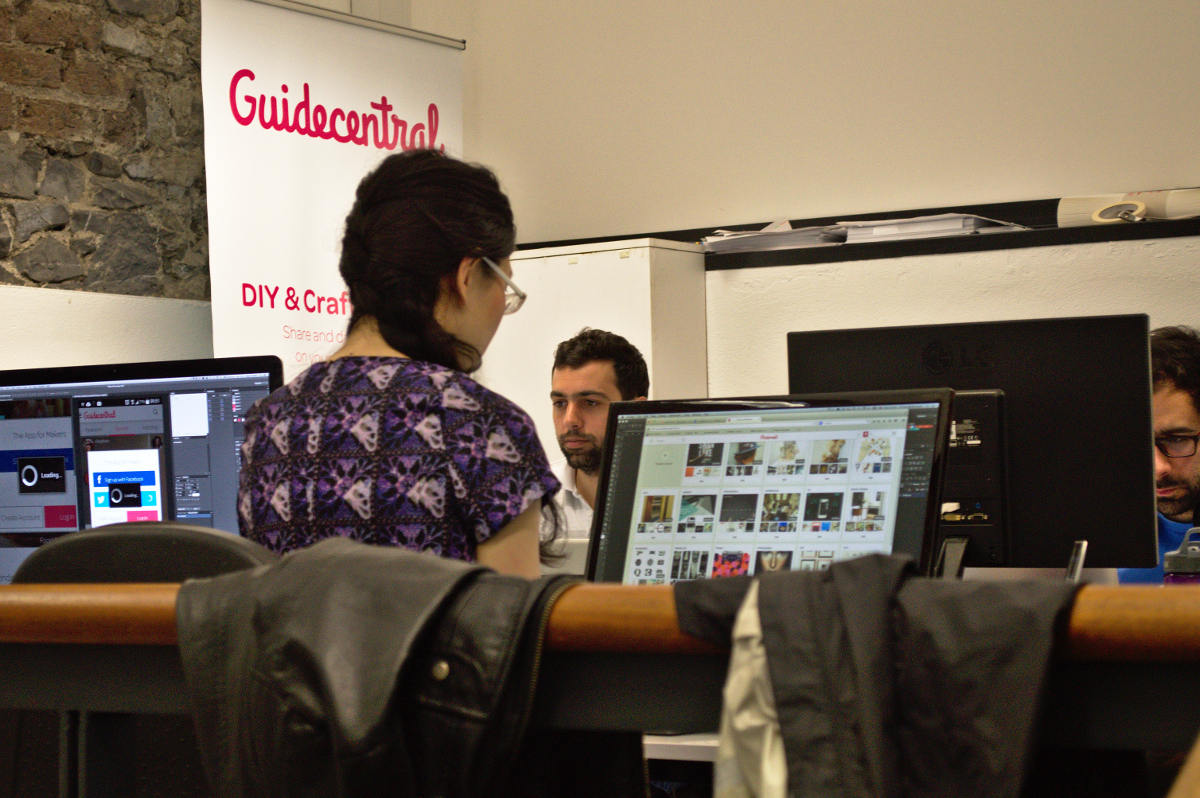 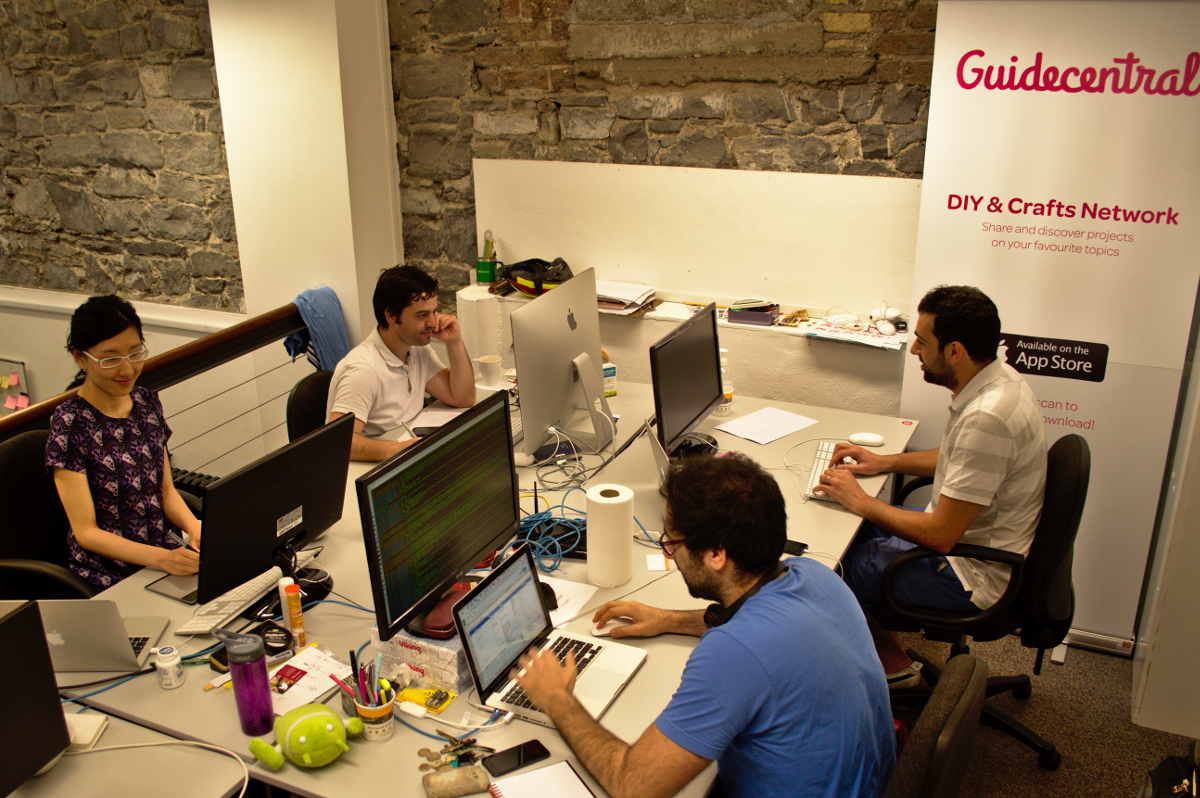 Guidecentral is not the only startup that sees Ireland as a perfect base for expansion to the US market. For the founders of BlikBook and Golf Metrics, this was one of the most important selling points of the country.

“We have to make it to the US if we want to be the main player on our market,” said Winther, whose startup is pursuing the audience of golf players. “We have founded a company in the US where we launch, but Ireland will be the brain and muscles in the full setup.”

Guidecentral’s Irigoyen, who relocated to Dublin five years ago, is among the tech professionals initially attracted by working in big companies — in his case it was Google — who decided later on to work on their own projects.

There are not many founders coming from the Internet giants based in Dublin yet,however it’d be logical to expect a wave of corporation-hardened entrepreneurs to populate the market in the next few years.

Right now though big tech companies are often perceived by startups as dangerous competitors for experienced tech specialists, the pool which has become somewhat shallow in Dublin over the past years.

“Entrepreneurs say hiring can be difficult, and good developers in Ireland are expensive because of multinational companies offering higher salaries and benefits than small startups,” said Winther.

The situation with talent attraction in Dublin, however, is still better than in some other tech startup hubs like London or Silicon Valley.

“If you’re an interesting enough company, you still can get the talent you need,” reckons Blikbook’s Barnaby Voss.

That also means that people working in startups in Ireland tend to be more motivated than elsewhere.

“What you can get here is developers who have experience in working with Google, or Facebook, or Microsoft. They worked in these companies for a couple of years, and now looking to do something different,” said Scanlon.

Anyway, there’s always a possibility to move the technical part of the team somewhere else. For example, BlikBook has established an R&D office in Ukraine, while Guidecentral considers opening one in Spain.

On the lookout for success stories

Even with a few imperfections, it’s safe to say that Ireland has come a long way to become an appealing country where startups go willingly to launch and grow.

“Ireland is one of the easiest places in the world to get seed capital,” said Scanlon. “Some founders still struggle to get visas, but I know there have been a lot of positive changes in policies. We’re certainly better than we were.”

While getting seed funding might be easy, startups at later stages might hit the wall, and this is also a problem that EI is working to solve.

“Something that Europe struggles with is when you’re trying to get your next round of $10 to $15 million and more, that’s difficult,” Scanlon said. “What the government is doing through EI is that we operate as a fund of funds, investing in larger European funds, companies like Highland Capital, Polaris, Sofinnova, etc.

“We’re creating a deal when large international VCs take one of their partners, put that partner on the ground in Ireland, and commit to bring a certain amount of investment into Irish companies. And that’s good because it gives access to that later stage of funding, as it happened recently with AMCS.”

While agencies, startups and funds are working hard to reach their goals, Ireland is clearly becoming an attractive destination for entrepreneurs, with more and more players joining its ecosystem.

“The community will grow, especially with new success stories,” says Voss. “I’m not worried that it will grow too big. The danger is trying to be exactly the same as another area — be it London or Silicon Valley. Dublin is unique, and needs to have its own identity.”

So far, the country and its capital have been quite successful in staying true to themselves, offering locals and foreigners a unique hospitality and equal opportunities to grow and strive. Looking at today’s community that forms the current infrastructure and ecosystem, there’s no evidence that this is going to change any time soon.

Don’t miss: How to avoid getting burned when hiring overseas

Note: The initial version of this article reported that EI’s Competitive Start fund can offer startups up to €15,000. That has been corrected to reflect the fact that up to €50,000 is available.