DIY platform Guidecentral is now accepting applications for its newly launched Maker Program, the startup announced in a tweet. As its name suggests, this new initiative will help crafters by sharing their projects and tutorials with users.

The application form is available both through Guidecentral’s free iOS app and as a Google document. It’s worth noting that applications will be filtered, and the Maker Program’s FAQ points out that candidates must be at least 18 years old, be registered on the platform through Facebook or Twitter login, have a complete Guidecentral profile and at least three approved, high-quality how-to guides. 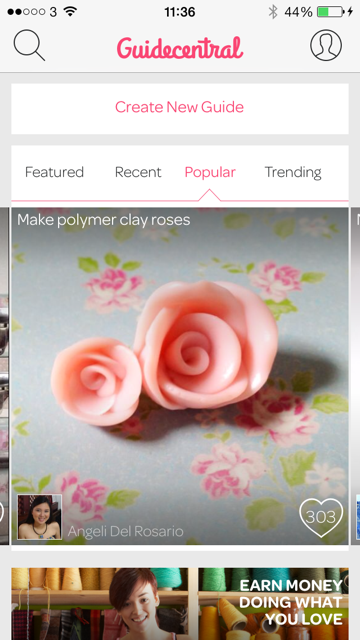 While quality is somewhat subjective, the startup gives some guidelines, such as using great pictures without watermarks or frames and avoiding incomplete captions.

Selected participants are set to receive $7 for every new DIY project shared by them through the app after joining the program and approved for monetization. They will be able to cash out they earnings via PayPal once they have reached $50. Their profile will also display a “PRO” Maker badge.

According to CEO and former Google and YouTube employee Gaston Irigoyen, this makes Guidecentral the first app to allow makers, crafters and DIY enthusiasts earn money by sharing their know-how. He also notes that this plan has always been part of the startup’s roadmap:

“Allowing users to share and monetize their knowledge is at the core of Guidecentral’s long term vision. Today’s release of the Maker Program sees that vision become a reality.”

As you may remember, Guidecentral received backing from Google executives, Buenos Aires-based accelerator NXTP Labs and Dogpatch Labs‘ Dublin chapter (disclosure: NXTP Labs is an investor in my startup, MonoLibre).

The startup launched its iOS app in October 2012 (alongside an Android version that is not available anymore as we write). According to Irigoyen, its community has since then grown to 75,000 monthly active members, a number that is increasing by over 20% every month.

While it is difficult to predict when the Maker Program will result in significant earnings for its first approved members, it can definitely help get them more eyeballs for their creations.