If Yo! has revealed anything, it’s that we could be seeing a steady shift towards a simpler form of digital communication. No sentences, no real effort, just the simplets of taps on your phone to say ‘Hey’. Or in this case, “YO!”.

With that in mind, a new app courtesy of London-based developer David Senior is looking to bring this one-tap ethos to business meetings. HERE, not to be confused with Nokia’s HERE, lets you inform fellow delegates that you have arrived and will be with them imminently.

HERE is actually a follow-up app to Lowdown which Senior launched earlier this year. To recap, Lowdown promises to enable smarter meetings by knowing where you’ve been, where you’re going, who you’re meeting, and when you’re meeting them. The hitherto UK-only app went international a couple of months after its initial debut.

HERE is about as simple a service as you’ll get. Once you’ve set things up by providing your name and email address, you’re asked to give permission for HERE to access your calendar, location and notifications.

For HERE to work, you must not only have meetings scheduled in your Calendar, but specific attendees – replete with their contact details – must be allocated to each meeting. Then, when you tap the big fat HERE button, you’ll be asked to select which meeting you’d like to check in at. And then you’re done.

You’ll then be informed that the attendees have been notified. The recipients will receive an email informing them of your arrival, though if they too have HERE installed, they’ll receive a notification directly to their homescreen. It’s also worth adding here that the app sports geo-notificaitons, so when you approach the destination, you’ll get this message: “It looks like you’re arriving, tell people you’re HERE”

There’s little question that HERE has been beautifully designed, as with Lowdown. But a dedicated, standalone app for something that really belongs within something bigger? I’m not entirely convinced.

Moreover, surely once you’ve arrived in the building, you don’t have to tell the attendees that you’re there – because you’ll all shortly be sitting around a table chewing the fat, right?

However, Senior says they ran an in-app survey of Lowdown users, asking if they’d like a quick way of notifying attendees they’ve arrived. The vast majority said ‘yes’. But why a standalone app? “Mainly due to the app trend towards simple apps like Yo, Ahoy, Beer and so on,” says Senior. “[But] HERE is focused on adding value.” 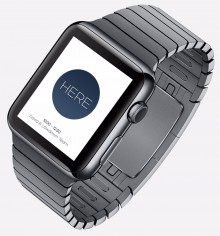 Senior has also confirmed that HERE will indeed be worked in to the main Lowdown meetings app in the coming weeks, which I could see being a really neat addition when weaved in to the wider platform. An uber-smart, all-singing/dancing meetings app – one that gives you single-tap “I’m HERE” notifications when the occasion requires it. Plans are also in place for an Apple Watch incarnation when it launches next year, which could be interesting.

The final point worth mentioning here is the name and stylization of the app – HERE. With Nokia set to re-launch its mapping platform on iOS in the coming months, couldn’t this cause a little brand confusion? In Senior’s defence, his app (including the name) was already in the works before Nokia revealed it was planning a return to iOS, so this is nothing more than coincidence.

Version 1 of HERE for iPhone is available to download now, though a design refresh is already in the works for the coming weeks. And an Android incarnation is being developed too, which should be arriving on the scene within a few months.