It’s been months in the making, and today we finally have confirmation from Apple, as well as a few squashed rumors. Apple has released the iPhone 4S today, as well as iOS 5 and the addition of Sprint in the company’s lineup of US carriers.

Funny enough, we got confirmation of the 4S name via Apple’s own Japanese store site, less than an hour before launch. Most of these rumors were nailed down prior to today’s event, but it’s good to finally get completely confirmation. That said, here’s a rundown of everything that happened today, plus links to our coverage for the specifics.

The Business of Apple

CEO Tim Cook opened, taking the stage with the obvious statement of “this is my first prouct launch since being named CEO”. The event is being held in what Apple calls the Town Hall. It is the place where the original iPod was launched, 10 years ago.

“Today we’ll remind you of the uniqueness of this company as we announce innovations from our mobile OS, to applications, to services, to hardware, and more importantly the integration of all these into a powerful, simple, integrated experience.”

Cook goes on to talk about the “enormous momentum of Apple, specifically the retail stores. Cook then highlights the year to date for Apple:

iOS 5 will land on October 12th, 2 days before the launch of the new iPhone and it will be a free update.

What’s new aside from what we already know?

Apple is introducing a new application that allows you to design cards on your iPhone, then have them mailed to anywhere:

“Apple is literally going to mail things, physically, for you. You create the card on your iPhone and we’ll do the rest.”

Free with iOS 5 and for Lion users. Locate your friends and family with your iPhone. Our full coverage is here.

The rest of iOS 5, we  have detailed pretty deeply. In short you can expect big changes to the following: 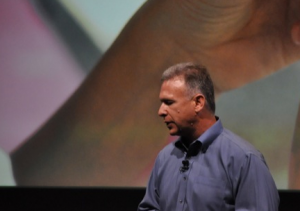 Phil Schiller took the stage to talk about the iPod, stating that he wanted to give updates on 2 of the lines today.

The iPod Nano touch gets a refresh, with Nike+ built in, 16 new clock faces and  will be available for $129 and $149 in 8 and 16-gigabyte versions respectively.

And now for the announcement we’ve all been waiting to hear, Apple tells us about the iPhone 4S (full details are here). It has the same design as the iPhone 4, but inside it is “all new”.

So there’s your roundup of everything that happened today, including links to the fine-point details. Want to make sure you caught up with every little bit? Check out all of our posts from today’s Let’s Talk iPhone event by clicking here.