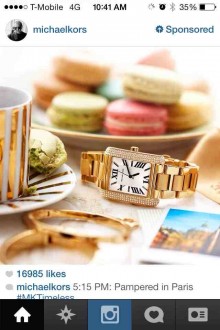 Four days after fashion designer Michael Kors became the first brand to run ads on Instagram, Nitrogram, a company specializing in analytics for Instagram, has taken a peek behind some of the key metrics of the inaugural campaign.

Just to recap, Instagram revealed it would begin offering sponsored posts in its app last month, before issuing a preview of what it would look like. With the Michael Kors campaign, if a user was in the targeted demographic, they would see this image with the label ‘Sponsored’ above it.

Now, Nitrogram has announced some numbers around the sponsored post. The company says that the ad brought more than 33,000 new followers to Michael Kors, which is 16 times more than the average number for the brand’s previous 5 non-promoted posts, each of which were featured on Instagram’s ‘popular page’.

Moreover, Nitrogram says that the sponsored post generated 370% more likes than the average of Michael Kors’ last 5 posts, with an estimated 6.15 million users viewing it.

You can read the full results from the study below.