HopStop, a much-loved website for public transit, cab, walking and biking directions, can get you to and from wherever you want to go in 68 major metropolitan markets throughout the U.S., Canada, Europe and Russia. Today, the team has just announced a major milestone of 1.25 million app downloads, and expects to hit 2M this summer.

Although Google maintains a strong-hold on the wayfinding mobile market, HopStop continues to grow at a remarkable pace. This is likely because HopStop, in my experience, can be significantly more accurate than Google when it comes to public transit.

HopStop’s iPhone app is responsible for a majority of these downloads, and it has been around for about 18 months. It’s Android app, which was released less than a year ago, has received tons of attention as well, reaching 100,000 downloads in a short few months. Overall, It took the team less than 2 years to hit the 1M mark, and may only take ~6 months to hit 2M.

HopStop released its Blackberry app in Q4 of 2011 and a Windows Phone app was launched less than 3 weeks ago. These new platforms should contribute to HopStop’s rise, but the team is also betting on another iOS device. Just launched over the weekend, HopStop for iPad appears to be quite elegant. The sleek design takes advantage of the tablet’s form factor, aiding the fact that the iPad is already great for traveling. 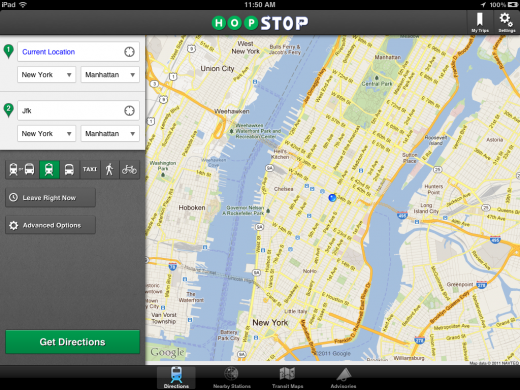 The company’s doing very well, but here’s the remarkable thing: HopStop has never advertised its product. All of its growth is completely viral, despite the fact that iOS and Android both default to Google Maps. CEO, Joe Meyer, told TNW “We have never advertised the service, [and instead] we spend all our time improving it.”

While solely relying on viral growth doesn’t work for everybody (Groupon, for example, relies heavily on search engine ads), it’s served many apps well, including heavy hitters like Instagram. It’s always a good thing when something grows because people love it, sans marketing dollars.

Have you used HopStop’s app before? How do you think it compare to Google Maps? Share your thoughts via the comments below!

➤  HopStop for iPad, and everything else.