Highlight today announced the release of a new version of its location-based service app. The company calls it a “big evolution of its product” and centers around a new photo-sharing service that centers around your location — the company calls it “photos + physical space”. Additionally, the update includes the creation of “walls” — that is, the launch of events that centered around spontaneity. These updates will be coming to both Apple’s App store and Google Play at noon PST today. 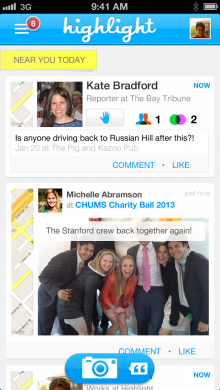 The core concept of Highlight’s photo service is that if you’re walking down the street and take a photo and are standing near someone else using the service, it will show up on their phone. The company says that it’s all focused on location and where the photo was taken. You can specify the place where you are, tag friends (it will show you those nearby on Highlight), share to Facebook and Twitter, and more. It’s more than traditional photo sharing.

Davison says that when you tag someone in photos, you are limited to your friends. As of this point, untagging is not possible — it says you need to “trust your friends”.

Founder and CEO Paul Davison says that when you share photos with someone, they’re already near you and have the same context, thus it’s a different experience from other photo-sharing sites. It’s more about communication rather than publishing. Davison describes the photo experience as being a way to give users context about what their friends did during the day.

It’s almost as if it’s a new version of Color or perhaps what Banjo has done previously with its anywhere data. 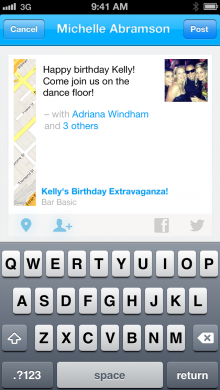 With its new Events feature, Davison says that the company wanted to create shared experiences that are “real time, fun, and authentic”, but didn’t want to recreate what was done by Eventbrite and Facebook. Davison says that when you create an event, users will notice that there is no events tab and no official organizer.

Highlight says that users can create an event right through a post. Tell people where you are — Davison says it’s more about spontaneity, the here and now. People cannot be invited to the event, rather they just show up if they’re nearby. If you’re physically near an event planner, Highlight will notify you that there’s something happening (within a 250 meter radius).

The event ends automatically when people leave and stop posting — Davison says it’s a combination of when people disperse based on the GPS in phones and when they stop posting.

Since its performance after the South by Southwest conference, Highlight says that it has made improvements to the battery life performance — something that it claims is four times better. Other changes include making targeted making notifications less and less, but more relevant. Since it invested in infrastructure, it has experienced a spike in user adoption.

In 1990, Davison says that the world was living in “cyberspace” and by 2010, people were accustomed to living in the physical space in that we’re walking around with a powerful instrument in our pockets that operate as gyroscope and barometers and tool that can connect right to the Internet.

This is the newest update from the location-based service company since it released an Android version of its app and unveiled better profiles. The company made its public debut last year at the South by Southwest Interactive conference where it was perhaps the talk of the town, competing against other similar services like Banjo, Sonar, and EchoEcho.

Highlight has received an undisclosed amount in seed funding led by Benchmark Capital and participation from CrunchFund and SV Angel.

The new changes are available for both iOS and Android devices starting at noon PST today.