Banjo is back and just updated its mobile app to help take you where you want to go in real-time while connecting you with people. This location-based service that shares information about the people around you has expanded its reach. Now, its 3 million users can check out places around the world and what’s happening right from the palm of their hands.

You might remember Banjo from earlier this year when South by Southwest (SXSW) took place and everyone was clamoring on about the “location-based wars” and which service, including competitors Highlight, Sonar, and others, would win it out. Well not much has been heard about Banjo since then, but it did pretty well during SXSW, with over 100,000 downloads taking place during the five-day festival, and has been growing quickly with it reaching a million users last April, and now it has surpassed 3 million. 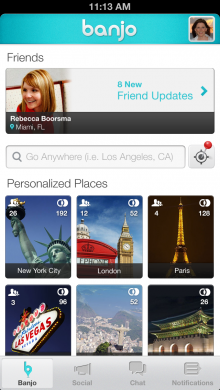 With today’s announcement, Banjo is introducing a new concept of “transporting” you anywhere around the world and helping you discover people, places, and things you care about the most.

No longer are you only going to be able to explore what’s around you — now if you’re in San Francisco and you wanted to see what’s happening in London during the Olympics, Banjo says that it can take you there. You might think of the update almost like Color mixed in with Foursquare rolled all into one.

Damien Patton, founder of Banjo, says that “while the industry traditionally has been focused on what’s happening around us, we found that people were leveraging Banjo’s technology to see what was happening everywhere else.”

Users can now connect more with friends by receiving notifications when they’re nearby, discover common connections by finding out just how your friends know others through social networks, allow you to create personalized places based on where you and your friends are right now, and search based on specific interests. 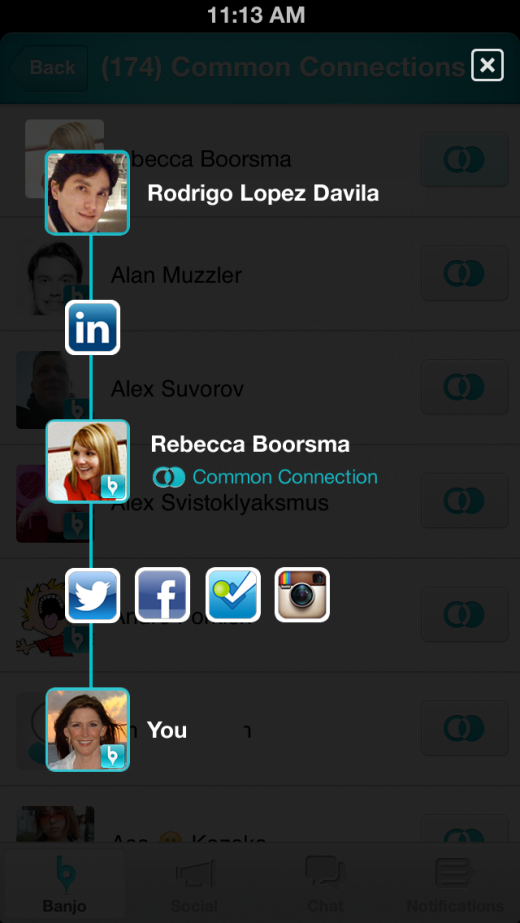 If you happen to be looking at the app and see your friends are in Austin in March, you might wonder why. With the update, you can “transport” yourself there and see who else is there. You might come across an investor, entrepreneur, developer, celebrity, or someone else that you’d like to know. Banjo lets you tap on that individual and understand your connection to them.

Think of it like “Six Degrees of Kevin Bacon” — Banjo pulls in information from Twitter, Facebook, Instagram, Foursquare, and LinkedIn in order to help you better understand your connections. If you find yourself intrigued by that individual, then you can follow them right from the app and connect on any social network too.

Right now, one thing that is in question is just how many degrees separated will the app show you. Meaning, what happens if John Doe is a friend of a friend of a Facebook or LinkedIn contact? How granular will the connection tree go? As of this point, it will probably simplify things and just show you a two degrees of separation.

Find out where in the world is popular among your friends

Banjo tells us that keeping track of your friends and connections can be a pretty time-consuming thing. To help make it easier, the service has personalized places that show you what the trending places are. If you see New York City, Paris, Tokyo, London, or even San Francisco appearing, it’s a sign that you have at least a couple of connections located there.

Going back to the SXSW example, around March, if you’re in the tech industry, you’re going to see a lot of your friends appearing around Austin, Texas. It will most likely be a trending area and so you can tap on the square in the app and see where everyone is in the city and what they’re doing and sharing across the five social networks the app supports.

Sure, this sounds like yet another location-based play without any real value, but Banjo says that no other app in the marketplace today does what it does. Is this going to replace Foursquare and any other location service? Probably not, but it looks like it’s certainly trying to consolidate it into one central app.

And if privacy is a concern of yours, Banjo tells us that the information that it pulls in from the five social networks is limited based on your privacy settings. It doesn’t override any of your preferences.

While it won’t go into specifics into its monetization strategy, the company will say that publishers and media houses have used the service before. Jen Peck, Banjo’s Director of Engagement, tells us that during this month’s Presidential election, CNN and FOX News both used it to curate information about what’s happening in Ohio on the ground — it says that it’s much more efficient than sending camera crews all around the state.

The app is available in 10 localized languages with Japanese on its way and is used in over 194 countries around the world.