There’s no shortage of music-related iOS apps, from Spotify and Songkick, to Shazam and Apple’s very own bundled music player.

Groove 2 is one of the latest music nuggets to hit the App Store, a product of Zikera and represents a slight rebrand and update from its previous incarnation titled, erm, Groove.

Having played around with the app this afternoon, Groove 2 music player really is a tremendous alternative and, dare I say it, a much better option to the built-in music app on my iPod Touch. So what’s new in this version of the app? Well first up, it has had a bit of a makeover, with a fully redesigned interface. But that’s just the cherry on the cake, as it comes replete with a host of new features.

Groove 2 has taken what was an already popular app for iPhone, iPod Touch and iPad and merged them into a single, global app. What’s more, it has also added in Last.fm scrobbling, which it seems was a much sought after feature by its existing users.

So…what exactly does Groove do? 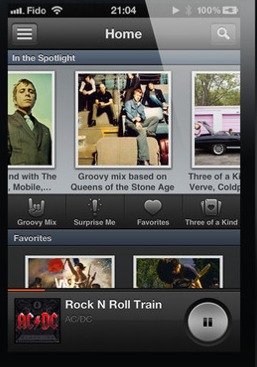 Groove is a music player…that much you’ve probably gathered already. It studies your listening habits and creates instant mixes, just like your own personal DJ. And if you’re not overly prescriptive about what you listen to and when, you’ll likely never have to create a playlist again.

You can scroll your tunes whilst a miniature version of the player remains at the bottom of the screen, and a tap maximizes it, letting you utilize your whole screen’s real estate. The player is very touch-oriented – for example, a quick two-finger swipe downwards rids you of the player and takes you back to the home-screen.

Whilst Groove was launched initially for iPhone, it finally arrived for iPad last summer. Groove 2, as we’ve noted already, merges the apps and essentially gives you the iPad app optimized for the smaller screens.

The app’s developer, Zikera, started out back in 2009 and since launching its original Groove app, it went on to be featured in the App Store’s ‘New and Noteworthy’ section, before hitting the giddy heights of the number one music app in Japan, Canada, Australia and New Zealand.

Groove 2 works across all iOS devices running iOS 4.3 or later, and it works everywhere in the world where there’s an App Store. Its usual $3.99 price-tag has been trimmed to $1.99 (£1.49 in the UK…) for a limited period. Of course, if you already own Groove for iPad, you’ll get this update for free to use across all your iOS devices.