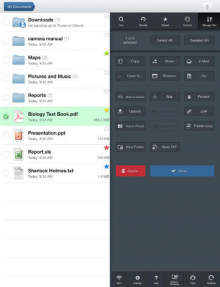 The GoodReader PDF app for the iPhone and iPad is ushering in the new year with a major revamp and new features like a rebuilt audio player and better integrated, more fully-featured file management options.

Released today, the update is the first since September 2013 and it brings simpler navigation through a revamped UI and more convenient access to tools. There’s also now the option to flatten multiple files with a single click, batch import/export to Photo Albums, tag or star files with different colors, or copy images to the clipboard for use in other apps, like Mail, or for saving as a standalone file in GoodReader.

Perhaps the most notable other update is the new audio player, which now works in the background, allowing users to read files while listening to audio. The audio player settings are now also better integrated into the app as a whole, meaning less time spent looking through menus. Along with other minor tweaks, GoodReader now also supports iWork 2013 (and older) files. The company also said that some PDFs will now render faster following the update.