As we shuffle deeper into the digital realm, there’s an almost tangible tension between the old world order and, well, the new one. With that in mind, what better way to kick off this week’s media recap by looking at some of the various pieces that titillated us this week?

To kick things off, old…meet new.

We all knew that newspaper revenues were always largely reliant on advertising, right? Whilst the decline in sales of physical newspapers obviously has an impact on the bottom line, the inevitable drop in advertising that accompanies this was given some clarity this week too, when Professor Mark J. Perry blogged about the decline in ad revenues to a 60-year low in 2011.

The chart displays total annual print newspaper advertising revenue based on annual data from 1950 to 2010, and estimated annual revenue for 2011 using quarterly data through the third quarter, gleaned from the Newspaper Association of America. It’s perhaps little wonder that the UK’s Guardian newspaper will likely be online-only within a few years.

With that in mind, paidContent revealed that global publisher Pearson’s digital revenue grew 18% to £2 ($3.17) billion in 2011, representing a third of its total revenue. Its subsidiary Penguin’s e-book sales rose a whopping 106%, and at this growth rate, Pearson will perhaps be thinking that its digital income will be outgunning its print revenue this time next year.

Mathew Ingram from Gigaom gave a pretty good argument for why Warren Buffett is wrong about newspaper paywalls, after the billionaire claimed that too many newspapers are giving away content online for free. Ingram cited the Washington Post’s strategy as a reason why paywalls aren’t necessarily the answer to newspapers’ woes. He said:

“I’m going to side with the Washington Post on this one, and one of the reasons for that is the way that Buffett describes his argument: he says that newspapers are giving away their product while still trying to charge for it. But that assumes the “product” is the news, and that this is what newspapers are charging for — and I don’t think that’s really the case any more.

For content companies of all kinds, the product is (and in many ways, always has been) the relationship that you can build with readers around your content. And the monetization of that now comes in many different forms…

…the Washington Post and some other media outlets have chosen to focus on reaching new audiences in different ways — including Facebook’s social-sharing apps. I have some issues with content companies giving over that kind of control to a walled garden like Facebook, but there is no question that this can expose a newspaper’s stories to much larger groups of people, and one of the strategies in the age of “democratized distribution” is to go where the readers are instead of expecting them to come to you.”

Elsewhere, Felix Salmon from Reuters argued vehemently for why journalists must link to, and acknowledge, sources they use in their stories, with reference to an essay from Jonathan Stray on Nieman Lab. Salmon says:

“If you’re mentioning a fact which you sourced in a certain place, then it’s a great idea to link to that place. And if you’re matching a story which some other news organization got first, it’s friendly and polite to mention that fact in your piece, while linking to their story. But it’s always your reader who should be top of mind — and the fact is that readers almost never care who got the scoop.

There’s one big exception to that rule, however. Often, a reporter spends a long time getting a big and important scoop, which comes in the form of a long and deeply-reported story. When other news organizations cover that news, they really do have to link to the original story — the place which did it best. Otherwise, they shortchange their readers.”

Meanwhile, we also brought you news that time spent watching TV has been overtaken by mobile media consumption amongst those who use the mobile Web. According to a new survey, at least.

It seems that a day doesn’t go by these days without Rupert Murdoch and his media empire gaining headlines for all the wrong reasons. And this week was no different.

Facing mounting pressure for the phone-hacking that allegedly took place under his stewardship, Rupert’s son James finally jumped ship from News International this week, moving on to a variety of “essential corporate leadership mandates”. Of course, this was really just a “show of action” on News Corporations part, as it looks to show that it’s cleaning up its act and getting rid of the ‘old’ regime.

But, things could be looking up for Murdoch’s media empire in the UK, as its recently launched Sun on Sunday notched up a cool three million sales on its first day of print, though we’ll need to see if it can maintain these kind of numbers regularly in the future.

Putting the ‘social’ into media

Media and social media are often pretty closely entwined. This week we brought you news that iPad app News.me, which pulls in popular news that your Twitter friends are reading and sharing, had launched a completely new experience for the iPhone with a brand a new app.

But the worlds of social media and traditional media don’t always mix so well, which could be why ESPN sent out an email to employees this week to remind them that Twitter isn’t their personal playground. As Deadspin reported, the email read:

“…it’s in everyone’s best interest to be smart about how to participate in social media circles. Twitter is truly another stream of media and, when used wisely, is a wonderful tool for you personally and for our company. That said, it is not your personal playground. It is not a place to incite arguments, render threats, divulge company information or opine endlessly.

Think twice before you re-tweet, for the information you are forwarding may not be factual at all, yet your name and credibility will be attached to that information. As you would on television, radio or in print, act responsibly, respectfully and professionally.”

Moving on, CNET reported that digital behemoth Yahoo (yeah, they’re still pretty big) seems to be turning to patent licensing to boost its fortunes, as it’s seemingly threatening legal action against Facebook if it does not agree to license 10 to 20 patents held by Yahoo.

Speaking of the social networking giant, this week also saw The New York Times, Manchester United and others load their Facebook Timelines with 100+ years of history, after the feature was rolled out specifically for brand pages earlier that day.

Everyone loves iPlayer, right? Well, if you’re in the UK you almost certainly do, and if you’re in one of the sixteen countries that has the global version of the video-on-demand (VoD) service then you may well do too.

However, one of its inherent limitations for UK license-fee payers was that the content could only be viewed via WiFi on Android mobile devices, something which changed as of this week. This brought Android devices in line with the iPhone, which introduced 3G-streaming functionality back in December.

Netflix receives more than its fair share of media headlines, and this week continued with that trend when The New York Times pointed out that TV shows now account for more than half of all Netflix viewing. This is interesting considering it first started life as a humble movie-streaming and delivery service.

It was Oscar week too, and Wired noted that the flagship movie awards ceremony had turned into a winning night for Netflix. Why? Well, because thanks to Netflix’s exclusive licensing agreement with the Weinstein company, “some of the biggest winners on Oscar night, including Best Picture and Best Director winner The Artist and Best Documentary winner Undefeated, will be available for streaming later this year on Netflix, and nowhere else.” 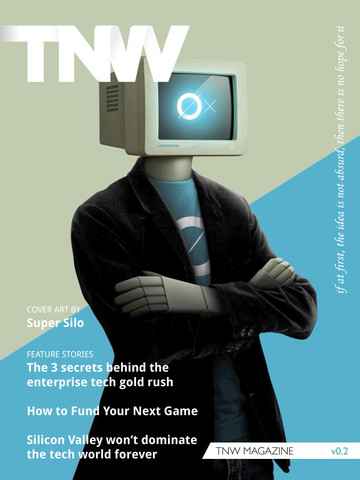 We’re not big fans of trumpets here at The Next Web, but on occasion we like nothing more than to have a quick blast of our own brass instrument and bring you something truly wonderful from our own labs.

Yes, this week, we brought you the spellbindingly beautiful TNW Magazine iPad app. All of the content will be fresh as a daisy, though you may see it crop up at a later point on the more traditional (ha!) medium which we call our website. It really is a cracker though, and if you own an iPad you should at least check it out – your first edition is on the house.