Are you one of Fon’s community of seven million members? If so, you’re already familiar with the company, whose ambition is to offer free WiFi everywhere thanks to shared broadband.

This “everywhere” just became closer to the truth today, as Fon just closed a partnership with the telco Oi to offer hotspots in Rio de Janeiro.

Fon will initially offer 150 hotspots in Rio de Janeiro’s trendiest and affluent neighborhoods of Ipanema and Leblon. This is just a start, as Fon hopes this number will increase to 500 by the end of the year – which seems feasible for a company which already offers 4.5 million hotspots worldwide. Besides, Rio’s city already offers public WiFi in some popular areas, such as Copacabana’s beach front.

According to Fon, “hotspots have been installed in restaurants, clubs, malls, salons, cafés, bars, gyms and homes” in both neighborhoods. Active hotspots can be found on the website http://maps.fon.com – here’s a preview to give you an idea: 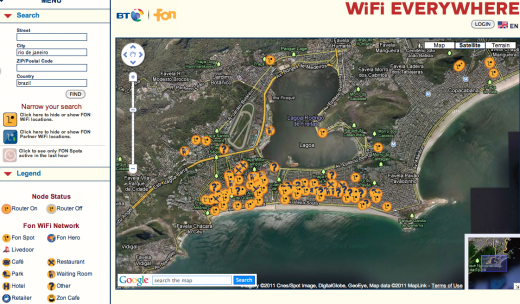 A partnership with Oi, open to other operators’ clients

Fon’s launch in Rio is a partnership with the telco Oi, which will be offering the service free of charge until January 2012 to several categories of its 67 million Brazilian customers (Oi Velox customers who have plans starting at 5 Mb, Oi Velox 3G customers and those who have subscribed to data plans starting at 2 Gb.)

A key element of Fon’s offer and identity is that customers can also share their own network to join the Fon community. Brazil won’t be any different, and any Oi Velox customer with speeds of 5 Mb or more can receive a free router that allows them to share part of their broadband connection.

Here’s what happens next, according to Fon:

When they do so, all of Fon’s customers will be able to use a fraction of the shared WiFi when choosing to connect to a user’s hotspot, and in exchange, Oi’s customers gain access to over 4.5 million Fon hotspots all over the world. Connection sharing is done in a secure way, since the private portion of the network is password protected.

A first step in Latin America

Although Fon was created in 2006 and has deals in 11 countries including Japan and the UK, this deal with Oi in Brazil is the company’s first deal in Latin America, which is quite surprising. After all, expanding to Latin America seems logical for Fon – not only is it a Spanish company, but it also has a Latin American founder.

Martin Varsavsky is indeed one of the top entrepreneurs to have emerged from Argentina (see our previous post 8 Latin American entrepreneurs to circle on Google +). A prolific Twitter user (see our story The 25 Most Influential People Tweeting About Entrepreneurship), he had posted a tweet earlier today presenting this launch as “Fon’s entry into Latin America.” No need to read between lines to understand that the company hopes to expand further across the region.

As he just pointed out in a blog post, Rio de Janeiro seems like a good place to start; smartphones and mobile devices are already booming in Brazil (see our post Smartphone usage in Brazil: why you’ll be surprised). Looking ahead, the city is also about to welcome millions of tourists attending 2014 FIFA World Cup and 2016 Olympics – considering roaming costs, there’s no doubt that free hotspots could come in handy.

Are you considering using Fon’s services? Let us know in the comments.