F8, Facebook’s biggest event of the year is here, and with it a whole slew of new features. After several days of anticipation, the social network super giant has officially announced the in depth integration of apps into Facebook’s new timeline feature as well as across Facebook’s service overall.

Mark Zuckerberg states that apps are now going to help tell the story of your life. These new apps can give you a nice summary of what you’ve done every day and every year. It’s worth noting that you’ll definitely be able to add apps in the same way you always have on Facebook, though now, you’ll also be able to discover apps through your friends’ new timelines as well.

“Open graph enables graphs that primarily focus on two types of things. Timelines, and discovering new things through your friends with frictionless experiences, real-time serendipity, and finding patterns in your friend’s activity.”

Zuckerberg also points out that some apps are naturally social, while others aren’t. To address this, Facebook is pulling back a bit on how many prompts it gives you to share your activities on the platform, reassuring users that it will no longer be hounding you to share absolutely everything. In this way, apps that you might not want to broadcast on your feed will remain lightweight and in the shadows where they belong. 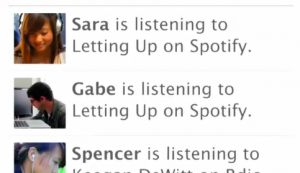 Facebook users will now also be able to discover new music through apps, with Spotify leading the way. Popular movie-renting service Netflix will also now be available through Facebook, pioneering the way to social movies. Even news is being given a social upgrade by receiving deeper integration with Facebook apps. Facebook has the potential to make absolutely everything we do completely social. Social games, for example, are already some of the most popular apps on Facebook.

Then with new lifestyle apps, Facebook users now have the opportunity to more deeply express almost everything they do through their Facebook feed, adding further depth to their own personal timelines.

Taylor goes on to say that developers are in the best position to decide what stories Facebook users might want to tell. In that sense, he encourages developers to create apps that appear beautifully on timelines in order to remain successful with Facebook’s progression. Directing developers to create apps with the timeline in mind, Taylor says that the more engaging a developer’s app is, the more people will enjoy discovering and using it on Facebook.

If you want to get started, timelines have a beta period that starts now, and will roll out slowly. With media apps (news, music, etc), you can begin adding these immediately to your timeline as it already works well with the current news ticker.