Do you know the Mexican startup Yumbling? While Yumbling doesn’t have an exact equivalent in the US, one way to describe it could be to call it “a foursquare for entertainment”. Its focus? Offering geo-aware leisure options curated for your personal taste.

In practical terms, Yumbling’s app lets you find restaurants, concerts and movie sessions while taking into account your location and learning about your preferences as time goes. It also lets you “check out” and share what you’ve been doing with your friends if you choose to.

When we first covered Yumbling back in August, its app was only available on iOS, Blackberry and Nokia devices; it is now also available in the Android Market in a beta version. Yumbling also updated its Blackberry app, extending sharing options via BBM, Twitter and Facebook. 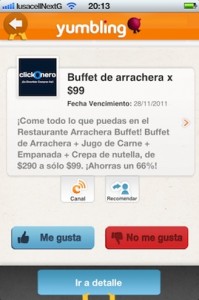 It’s not the only interesting piece of news at Yumbling this month: the startup has also expanded its geographic coverage nationwide. While Mexico is by far the most populated area in the country, being available in other regions certainly increases Yumbling’s potential user base as well as its attractiveness for commercial partners.

Partnerships are a key element of Yumbling’s business model, and the company recently introduced a new feature called Canales (“Channels” in Spanish). Taking advantage of geolocation, it offers selected discounts and promotions from partners such as the bank BBVA and the daily deals site ClickOnero (see our post mentioning its German co-founder).

The company already confirmed more Channels will soon be available. According to the startup, its app now lists 22,000 commercial establishments across Mexico, including 9,700 restaurants, 545 movie theaters, 250 theaters and 1,900 cultural centers. In other words, Yumbling is now a player to count within the Latin American check-in space.