Dropbox has earned its place as a powerful productivity tool among individuals and teams, but in playing two roles, many Dropbox users are now stuck with two separate accounts, forced to constantly log in and out. Now, to ease the experience for users bound to a teams and a personal account, Dropbox has added the ability to easily switch between the two without ever logging out (Google-style).

It’s noteworthy that this feature will not affect Dropbox users that own two separate personal accounts. If you’re not a member of Dropbox for Teams, you’re out of luck. 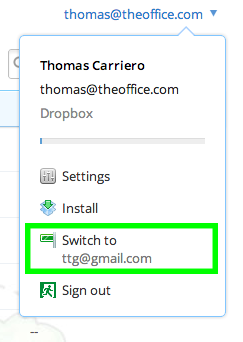 Of course, offering this feature to holders of multiple personal accounts would be great too, but that move could also undermine Dropbox’s monetization strategy by making it easy for users to link free storage together. Alas, for now at least team members can benefit.