During the 5-day conference, everyone was buzzing about popular apps like Highlight, a location-based, social networking app and Lanyrd, an events planning app that leverages your social connections on Twitter to deliver relevant panels. In fact, these were the two “winning apps” of SXSW, according to LaunchRock, the San Francisco-based startup that helps other startups build an audience with alluring, tweet-inducing launch pages and Crosswa.lk, a.k.a. the “Pandora for apps”–a discovery tool that taps your social network to create a springboard for finding download-worthy apps.

Today, Crosswa.lk and LaunchRock published a list of results from SXSW titled: Who’s Winning Austin, based on data from Crosswa.lk verified downloads. The score is based on % user growth during the conference. 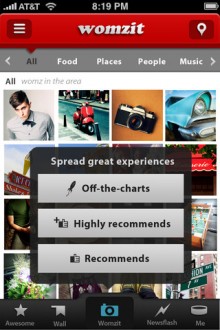 While Lanyrd and Highlight top the list, at 33% and 26% user growth, respectively, WOMzit, an app I’ve literally never heard of came in 3rd, with an increased user base of 21%. At first glance, WOMzit doesn’t look half bad, billing itself as “the Word-Of-Mouth app –a fun, fast and frictionless way for you to spread your recommendations.” (Surprisingly, it has nothing to do with face acne.)

The data is somewhat misleading because apps with more users like Path and Pinterest, which grew just 3% and 5% respectively had larger pre-SXSW install bases. Thomas McLeod, Crosswa.lk’s President and co-founder explains that in order to collect the data, they tracked what apps saw the most growth relative to their actual download sizes during the run of SXSW across Crosswa.lk’s whole site.

“In short you can immediately tell that social based discovery ruled the roost, but some established brands like Task Rabbit, Soundcloud, and Turntable managed to capitalize on having a strong presence during SXSW as well,” he says.

Check out the full set of rankings at the link below. You’ll also be able to see the number of people on Crosswa.lk with the app and the number who have “Loved” it.

Liked this? Check out The Ultimate SXSW infographic here.

And read all of our SXSW coverage here.