Quip for Android has received a few updates today that the company says includes a number of “most-requested” features. With the release, the modern word processor app becomes more accessible in seven new app stores, removes the need for an account, lets you import documents, make background updates, and even import your contacts right from your phone. 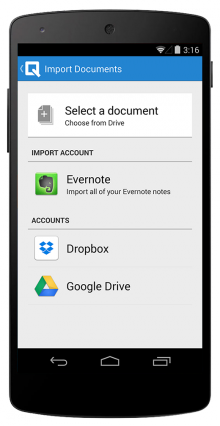 Previously available in the Google Play app store in the US and in Europe, Quip is now branching out to allow users to take it out for a spin. Among the new markets include the Kindle Fire store, Yandex in Russia, and in 360 Mobile Assistant in China.

The next couple of updates are intended to bring Quip’s Android version up to parity with the rest of its platform. The first involves the removal of a restriction iOS app users have had for a while: no account is needed in order to use Quip.

With Quip for Android 1.6, you can start writing immediately without having to log in. And when you want to share a document and begin collaborating with others, the company says you only need to add your email address. We’re told that some users have expressed a desire to be able to have the freedom to create content without having the barrier to log in — adds a measure of complexity that you wouldn’t find in the Microsoft Word experience. 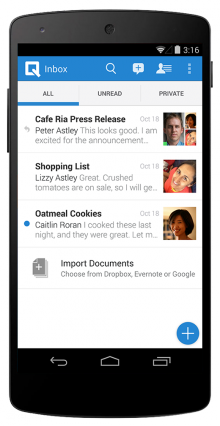 Quip has also added a feature to its Android app that allows it to process updates in the background. The company says that you won’t need to mark your documents for offline access or even force it to sync — it’ll all be handled automatically.

Lastly, you can now import contacts from your phone, Yahoo, Google, and Outlook.com right into Quip. This was done to make it easier for users to have access to friends and co-workers quickly — if you’re working on a document and need to share it with someone, instead of going into your address book and searching for their email address, it can be done with a single click inside Quip. Of course, the company says that it will never email your contacts without your “explicit permission.”