It’s long been established that moving to cloud services isn’t always the cheaper option. But for those who have made the jump, keeping track of what they’re spending and wading through the seas of TOS is certainly less fun. But today, after being in beta for a year, Cloudability is taking its cloud spending and analytics tool into general availability to solve that very issue.

Self-described as something akin to a Mint.com for the cloud, Cloudability has touted its instance-level cloud analytics as a huge selling point. Users can sign up to get daily or weekly spending emails, they’ll get real-time spike and overage protection and the hope is that they’ll waste less money by preventing purchases that they don’t need. 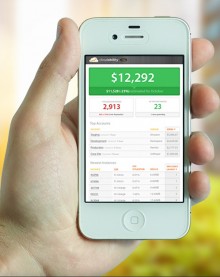 Oh, and it’s free. At least for most of us. Cloudability Pro steps up the game by giving customizable reports, instance-level cost and usage numbers, predictive budget alerts, an API and more. Though the free product should still serve many folks well, the added versatility of Cloudability Pro will be welcome. Pricing starts at $49 per month, covering up to $10,000 per month in cloud service spending.

The reporting function is probably what stood out to me the most. CEO Mat Ellis tells me that there are over 30 metrics that can be used in the customized reports, and Cloudability is pulling down actual invoice and billing data, rather than relying on estimations as many companies do. Cloudability covers services from Amazon, Rackspace, Heroku and many more.

The company is a graduate of the TechStars Cloud program, raising just shy of $10 million to date from Foundry Group, 500 Startups and others. There are other options on the market, such as Cloud Vertical, but nobody seems to be offering the breadth of coverage that comes from Cloudability.