I’m here in San Antonio, Texas for the first ever TechStars Cloud Demo Day, and the action, along with the weather, is definitely heating up. This is the first ever “Cloud” version of TechStars, which was started as an incubator and mentoring project in Boulder, Colorado.

Eleven teams from all over the country moved to San Antonio, for three full months, to be a part of the inaugural Summer class of for 2012. Along with the eleven companies there are more than seventy mentors that have helped each of these companies build their products as well as a potentially profitable business model. All of the companies are hoping to find savvy investors who share their vision to build powerful data services stored in the cloud.

Infrastructure technology might not be as sexy as building games with really irritated birds, but it’s these companies who will facilitate the future of expanding the capabilities of budding products who want to scale to meet the demands of millions of customers.

TechStars founder Dave Cohen has done 13 of these demo days, and is excited to see the type of community he helped build in Boulder come to San Antonio.

The event is being held in the Empire Theater, which is right in the heart of San Antonio. The place is packed with people standing in the back, waiting to hear from these companies:

Appsembler is a “business in a box” for companies that want to sell software as a service. Like other platform hosting companies, they offer scalable and push button application hosting, but in addition to simple hosting, their service also gives a company integrated billing, support tickets, and SEO optimized web content for SaaS products.

Callisto.fm is a next generation media analytics company. Built specifically for media creators, they can tell who is actually engaged with content. The service is cloud based, realtime and can work with any type of media and on any device, platform or service. They capture rich analytics around interactions (play, pause, seek, shares, likes, and more) in order to give content producers actionable insight into their audience.

Cloudability monitors and manages spending in the Cloud. They help companies better understand where they are spending in the cloud, identify waste, and make suggestions about how to optimize spending. They also allow companies to bring all their accounts, from any of hundreds of vendors and for dozens of internal accounts, into one consolidated view. Cloudability is currently managing over 53 million in cloud spending for 2200 companies and announced this week a partnership with Rackspace allowing all 175,000 of Rackspace’s Cloud customers to use Cloudability for free. Customers include companies from StockTwits and Slideshare to Adobe and Pega Systems.

CloudSnap is integration as a service. They allow a user to connect any of hundreds of SaaS products together without writing a single line of code. This lets you do tons of useful workflow and data synchronization such as connecting Mailchimp leads to Salesforce deals or importing Shopify invoices into Netsuite. And all of this is push button and requires no developer time or ongoing maintenance.

Conductrics is a decision optimization service that goes way beyond simple A/B testing and reporting. Conductrics uses machine learning to take a customer supplied set of choices and dynamically and adaptively learn what the best option is. When conditions change, the service learns and automatically updates for the new optimal choice. This allows a website or application to always have the highest converting content in use. Customers like Under Amour are integrating Conductrics directly into their CMS, which lets them bring adaptive behavior directly into the content creation process.

Distil is the world’s first Content Protection Network. The cloud service sits in front of customers’ web servers and identifies and blocks attempts to scrape data. Google punishes sites heavily in search results for having non-unique content and by using Distil companies can contain the loss of SEO, visitors and revenue by blocking content theft.

EmergentONE is the first API generation platform. Using a simple web UI, a customer can connect to their existing application’s database and auto-generate a robust and well- designed API. In addition to the API itself, EmergentONE generates developer documentation, language specific libraries and back-end analytics views.

Flomio is a platform for building NFC and RFID enabled applications. The service is hardware agnostic and cloud based. This means Flomio can work with any NFC enabled devices and masks all the complexity of NFC, exposing the service as a simple web API. They also sell tags, readers and a ‘Square-style’ audio jack plug-in that can convert any phone into an NFC reader.

Keen.io is an analytics platform for mobile and application developers. Rather than morphing data into a pre-packaged analytics service, Keen believes that app creators should be able to collect all their data in its natural form. Once a customer’s data is in the Keen.io service, they can be their own data scientists and run experiments against historical data in order to gain insight into app users behavior.

Tempo is a hosted time series database. Time series data is becoming a huge component of the ‘Big Data’ landscape. Every device and sensor is creating millions or billions of data points and existing big data systems are not optimized specifically for this type and quantity of data. Tempo is purpose built for time series data and allows companies to hold unprecedented amounts of this data letting us finally get value out of all the data our new measured world is generating.

Vidmaker makes it easy to manage and edit videos on any device, anywhere and with anyone. The service has an integrated web based video editor, Google Docs-style video collaboration, a built in community stock footage library and tons of other features that make the process of creating, editing and publishing video content a joy rather than a chore. 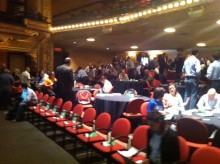 Most of the crowd is made up of VCs and investors who are chomping at the bit to be part of the next big thing in the cloud. There are over 300 investors watching the demos and there will probably be some check-writing happening when all is said and done.

I’ll be listening to all of their demos and letting you know which companies are ones to keep an eye out for, and I’m pretty excited to see such a tech buzz happening in the Lonestar State. When you think of tech in Texas, you immediately think of Austin, thanks to SXSW. TechStars is changing all of that with Cloud Demo Day.