We first covered Bitcasa way back in 2011, a cloud storage startup promising to bring infinite storage to your desktop.

Almost one year on from that, and Bitcasa was already managing 5 petabytes of data, before going on to launch mobile apps and promising to leave beta by February.

Well, February is here and Bitcasa is indeed coming out of beta more than a year-and-a-half after it was founded.

The Next Web caught up with Bitcasa CEO Tony Gauda a few months back, where we discussed what ‘infinite storage’ actually means. Gauda actually compared Bitcasa to Spotify, as opposed to other cloud-based storage and file-sharing services out there. 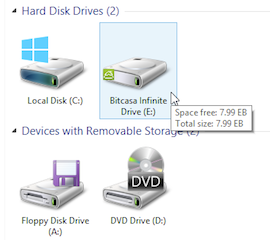 Now, Bitcasa’s Infinite Drive service for iOS, Android, Mac, Windows, Windows RT, and the Web is officially rolling out, costing $10/month or $99/year. For February, however, Bitcasa is offering a special discount, which means you can get a year’s access for $69.

Bitcasa’s Infinite Drive works similar to an external hard drive, in terms of how it shows up next to your other local hard-drives.

Indeed, users can free-up space on their machine by shifting files from laptop and mobile devices to their Infinite Drive. And because we’re talking ‘cloud’ here, all your files are available from any device.

“When I started this company, I talked about faulty external hard drives and the outrageous fees for limited file synchronization services,” explains Gauda. “I believe — and many of our users will agree — that, with the launch of the Bitcasa Infinite Drive, hard drives are now dead. Our customers have stored more than 1.7 billion photos on the Infinite Drive, and this is just the beginning. Imagine a world where gigabytes simply don’t matter anymore. That’s Bitcasa.”

In terms of who’s using the service, well, the company says everyone from families to photographers to musicians are using Bitcasa’s giant hard-drive in the sky.

Bitcasa was founded by former Mastercard and Mozy employees and is backed by investors such as Horizons Ventures, First Round, CrunchFund, Pelion Venture Partners, Samsung Ventures and Andreessen Horowitz.