Clear, a simple and incredibly beautiful productivity app for iOS and Mac OS X, has been updated today with the ability to send to-do lists to another user by email.

When TNW’s Matthew Panzarino first looked at Clear on the iPhone back in February last year, he gave it a pretty glowing review. “There are apps that make you re-think the way that you’ve been using apps altogether, breaking the mold and re-forming it with just a few minutes of use,” he said. “Clear is that kind of app.”

It’s a straight-forward, if relatively limited list app for managing your workflow and getting things done. It’s separated into three levels – a main menu, list view and item view – where users can create tasks freely and dismiss them with a single swipe.

That’s basically all there is to it. A bright color gradient conveys the priority of each item and a handful of intuitive gestures can be used to create, dismiss or rearrange them at anytime. 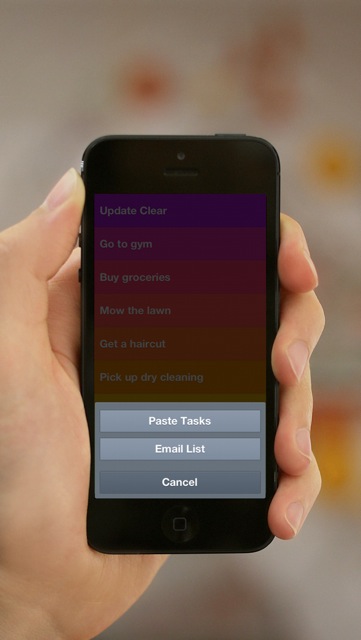 The development team then launched Clear for Mac in November, bringing over the same polished design with an entirely new control method for the mouse or touchpad. Both apps were also updated with iCloud integration, adding some basic cross-device sharing functionality.

Today’s update takes that feature one step further, however, by giving other Clear users access to your lists. Just shake the iPhone and hit the ‘Email List’ option at the bottom of the screen. Clear then packages a file that can be opened up through both the mobile and desktop version of the app, retaining all of the items and the user’s ordering.

If the recipient isn’t using Clear, it’s not a problem either. The list is shown as a standard image embedded in the email, allowing anyone to take a quick glance and take action on the relevant items.

Emailing a list from the desktop version of the Clear app works in much the same way. Head to the Actions menu and hit the Email List option to send your agenda into someone else’s inbox.

Clear hasn’t changed an awful lot since its conception, but that’s okay. It’s charm and success can be attributed to its sheer simplicity, removing much of the noise associated with complex productivity and note-taking apps. For that alone, it still deserves your attention.