China’s censorship regime — known colloquially as the Great Firewall (GFW) — is arguably the most famous of its kind. It rebuffs a range of popular Western sites, including Facebook, Twitter, Foursquare and more, is often tuned to block very specific terms — or keywords during specific occasions, such as the recent Tiananmen Square anniversary — but, most importantly, it often acts like it has a mind of its own.

Just last week, the latter face of the GFW was shown when all domains ending in .co.jp were blocked from China’s Web space.

So that means any website with a local Japanese domain was unviewable to public Internet users in the country, although those with dedicated VPN systems could, as ever, bypass the blockage and access the sites.

The block lasted for 30 hours, according to Global Voices, between 15-16 June. Most importantly, it represented the first time that China has ever blocked an entire top-level domain, the popular international blog explains. 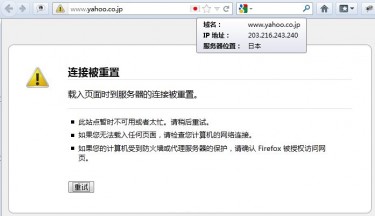 While it remains to be seen just what kind of effect the issue had for most of China’s Internet users (probably very little), it is of concern as it raises the possibility that other country specific domains could fall foul to the GFW.

Such an outage would cut website owners out from the country’s 500 million plus Web users, which is most definitely not a good thing for many businesses.

Japanese companies have widespread commercial interests across Asia — particularly in Southeast Asia — although most organisations with a local presence would use a Chinese domain for their business in the country – something that was just made easier as the country relaxed the rules on buying .cn domain names.

Japanese websites using .com or .jp names were not affected, suggesting that the issue was a technical error rather than a deliberate move against specific websites. However, given the oft-haphazard approach of the GFW, it will be interesting to see if the issue is raised again with more significant consequences.