This article was published on October 1, 2014

Baydin brought its Boomerang email client to Android last year with a focus initially on Google accounts, though support for Microsoft Exchange was introduced just a few months back. In a nutshell, Boomerang lets you ‘snooze’ or schedule emails for later, while also delivering a neat response-tracking feature. 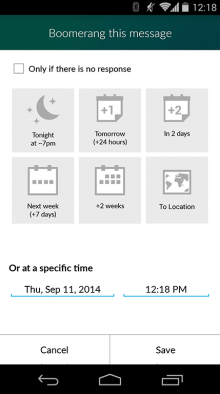 With its latest release, the app has been given location-awareness functionality that resurfaces emails the second you arrive at a specific location. So, an email with key information could be pushed to the top of your inbox when you arrive at an important business meeting, for example. This echoes a similar move made by task-management service Todoist earlier this year, when it rolled out location-based reminders.