For the past few years Nir Eyal has been writing about building products that become a habit on his blog, Nir and Far. His co-author, Ryan Hoover, is a product guy who has worked at several startups and is the co-creator of Product Hunt (think Hacker News for products). I’ve been admiring both of their work and writing for a while now and have been mentioning Nir and his Hooked model in every talk I’ve given at conferences about Marketing for Startups in the past year.

Nir knows of what he speaks, he’s had two startups and has an MBA from Stanford. While he claims to have gone to the School of Hard Knocks on his blog – from where I’ve standing he seems to have had a fairly awesome life doing something amazing that he loves and is brilliant at – building good products.

That’s what Hooked: How to Build Habit-Forming Products is all about. If you’re at all product-centric, this is a book you must read. There’s a caveat in the beginning about how Hooked is primarily for products that need to have a habit built-in, as in something one uses daily, something like Facebook or a bookkeeping platform. However, while the main points are specifically about those types of products – it’s actually good for any product being built. Hooked is about making things into a habit, but it’s also about where to make things seamless, where to give a variable reward, and how to pull people back to your product through action triggers.

SIDE NOTE: Nir will be speaking at TNW Conference Europe. Meet him there. 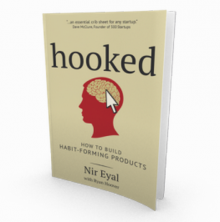 The Hooked model starts with BJ Fogg’s Behavioral Model of Behavior = Motivation Ability and Trigger and takes it much deeper. An example of Fogg’s Behavior Model would be me giving my kids a kiss in the morning when I first wake up. The behavior would be the kiss I give my kids, the motivation is my love for them, the trigger would be me waking up, and of course my giving them the kiss requires me being able to, so it doesn’t happen when I’m on business trips, unfortunately.

In other words, a behavior only happens when there is motivation, ability and a trigger. If you’re missing one – it won’t happen. The easiest way to build the marketing into a product would be to focus on making the action as effortless as possible, as motivation varies and is difficult to gage. Hooked takes the B=MAT model and puts it into a frame, putting the psychology into products.

The example I typically give for the Hook Model at conferences is my love and obsession with Pinterest. I’m now checking Pinterest every morning when I wake up and at night before I go to sleep. And if I’m writing something in the day and I’m stuck, I might click over for a look. How did I get addicted to Pinterest? If we look at the Hooked model it worked as follows: Trigger, Action, Variable Reward, Investment.

In the beginning there were External Triggers. I would get emails (highest ROI of all digital marketing) letting me know what pins were popular that week, and who had pinned one of my pins. This would trigger an Action in me, as it reminded me about the site, and I would go back to see if anyone had pinned anything interesting. From there I would get a Variable Reward, because I wouldn’t love every pin from the people I follow, just some of them. That variable reward would trigger a dopamine rush in my brain, as I saw something I liked and would pin it to my own boards.

The never-ending scroll meant I would lose an entire day to the time-suck that is Pinterest. That Investment of my time convinced me that Pinterest was a worthy way to spend my time, otherwise how could I have spent an entire day there looking at gorgeous things? Eventually my enjoyment turned into an Internal Trigger, where I go back daily on my own, because I enjoy it, instead of being reminded about it through an email.

Nir explains each quadrant in detail, explaining the psychology behind the behavioral engineering. It’s a fascinating, well-written read, and honestly – if you have a startup it’s a requirement for your Kindle. My only complaint about the book is that I knew  bits of it already, having poured over Nir’s blog so many times reviewing each post to the letter. Even with my obsession with his work though, the book is worth it. There’s enough that isn’t covered in his blog to stay interesting and informative. Highly, highly recommended.

Author’s disclosure: I am listed as a contributor to Hooked because I volunteered to read it ahead of publication to give feedback. However, I do not earn any money from sales of the book.

This article contains an affiliate link. While we only ever write about products we think deserve to be on the pages of our site, The Next Web may earn a small commission if you click through and buy the product in question.