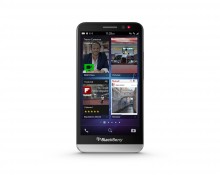 BlackBerry has announced a new addition to its BlackBerry 10 series of smartphones in the form of the Z30, a full touchscreen equipped model with a 5-inch display and 4G capabilities.

Announced today, the Z30 also brings the most recent 10.2 version of the BlackBerry 10 OS, a 1.7GHz processor with quad-core graphics, and a 2880 mAh battery that Blackberry says is good for 25 hours of mixed usage.

Other tweaks include a reworked antenna system for better reception and a Priority Hub that automatically learns and categorizes your messages and emails as important, or not.

The Z30, price currently unknown, is set to start arriving in the UK and Middle East from next week, with BlackBerry saying it will make its way to all other regions in the run up to the holiday period.

While the specs of the Z30 make it no slouch, BlackBerry really needs this device to gain traction with consumers if it is to have a chance of surviving in its current form. In August, it announced it was seeking strategic alternative options for the business.