BBC director general Mark Thompson has confirmed that the broadcaster is working on launching a service that will let users download individual TV programs for a fee, the Guardian reports.

Thompson made the announcement during a speech at the Royal Television Society (RTS) in London today. The rumor had first emerged last week that the BBC was working on this project, named ‘Project Barcelona’.

According to speculations, each episode could be priced at £1.89 (US$3) and it seems the platform would only offer purchases. As a matter of fact, TV episode rentals have proven disappointing, and Apple itself decided to drop them altogether last August.

The discussions on price point will be interesting to watch. When it was first reported that the BBC was pondering charging UK iPlayer users to watch archived content, the anger it initially generated online led a spokesperson to declare that the charge would merely be a micropayment to cover the BBC’s own costs.

Anticipating criticism, Thompson reportedly insisted that this project wasn’t a “second licence fee by stealth,” in a country where the annual license fee costs £145.50 (US$228). After all, people are already used to buying DVDs of programs they have enjoyed, and the platform would be offering the same possibility at a lower pricing, he said – though taxpayers may disagree.

It also remains to be seen how content producers will react to the project, considering the impact such a launch could have on the audiovisual market. However, Thompson revealed that he had already started to talk to British indie producers and to their trade association, Pact.

Thompson also insisted that any license agreement with content owners would be non-exclusive, leaving producers a chance to license their programming to other platforms.

It is expected that programs would become available very shortly after broadcast, in the same window as catch-up TV. According to BBC News, Thompson added that more and more programmes from the archive would also be uploaded to the service. 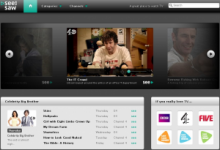 Will that be enough not to irk regulators? Only time will tell – as you may remember, BBC Worldwide’s Project Kangaroo bit the dust when the UK’s Competition Commission deemed it anti-competitive, while its hybrid offspring SeeSaw failed to take off and finally shut down last October.

For now, the first green light Project Barcelona needs to get is the BBC Trust’s, which will review it later this year. Thompson himself is expected to step down from his role in late 2012 or early 2013.