Automattic has released an iOS app update for its popular WordPress blogging platform. With version 3.7, users will have a native WordPress.com Reader, better account management, and more.

WordPress for iOS 3.7 is perhaps the fourth update that Automattic has made over the past year. It comes following company founder Matt Mullenweg’s “State of the Word” address last month where he revealed 31 percent of users are posting through the WordPress iOS app. 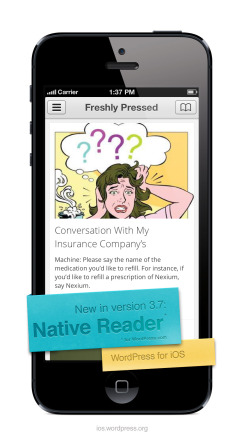 Included in this update is the addition of a native reader. First introduced in version 2.9 in September 2011, Automattic says that the original Reader was a combination of “native code wrapping” and lots of JavaScript, but it never became part of the mobile experience. With version 3.7, the app now has 100 percent native code and can be accessed through the sidebar. It will provide you with stories from your subscribed blogs, favorite posts, and other related content.

Handling multiple accounts has also been improved in this latest version. Automattic says that many improvements took place under-the hood so users won’t notice a thing. However, the company says the app will now do a better job connecting itself to multiple services such as your blog, Jetpack, Reader, and anything else.

The release of WordPress for iOS 3.7 comes just days after the version 3.6 of the blogging platform was launched. For those using it on their desktop, it offers a new blog-centric theme, better post locking, new HTML5 media player, and other assorted features.

Automattic is on a rather aggressive development track in 2013 as it plans on launching several new versions with a focus on design, stability, security, and quicker iterations.