Appsfire is continuing its battle to “kill the banner ad” on mobile devices after it launched its announced its newest advertising unit: one which places promotional messages inside the pull-to-refresh mechanism within iOS apps.

To recap, the company is on a mission to reinvent advertising on mobile, and it has already announced two new ad formats: Ura Maki, an innovative in-app scheme for iOS, and Sashimi, which delivers in-feed ads. Its pull-to-refresh unit is called ‘Brichter-San’, in keeping with its Japanese naming convention and also paying tribute to Tweetie founder Loren Brichter, who pioneered the concept of pulling to refresh. 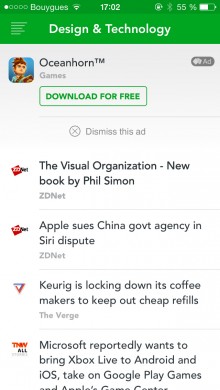 Brichter-san is quite unlike any kind of ad unit that we’ve ever seen on mobile — and that’s predominantly a good thing.

“Thousands of apps include a pull to refresh gesture. This gesture has become with swipe the native gesture to mobile apps. Most ad solutions are designed for games, but more than half of App Store content is not games and traditional ad units don’t perform well there,” Ohayon further explains.

So how does it work exactly? Pretty much, as you’d think, as the video below shows.

Appsfire is opening Brichter-San up to developers today, via a re-released version of its SDK — which originally went live last November — that supports the new ad format.

Ohayon explains his belief that a “generation” of services — including Twitter, Facebook and YouTube — are rushing to bring native advertising to mobile, but he is sure that there is more to it than in-streams ads. Instead, he wants to offer a more original (and better performing) option to developers, which also gives them “total control” and higher payouts.

Finally, Appsfire is also launching a new 360 degree dashboard to its customers, to give them access to a range of data, including store metrics, free push services, free feedback management, real-time monetization and app stats.

Ohayon says that Appsfire currently has 40 publishers using its services. Results, he says, range from 5-20 percent click views and conversion rates of 10-20 percent — both of which is well above industry standards.