Ron Johnson, the former senior vice president of retail at Apple, announced his impending departure from Apple in June of last year. He has now officially vacated that spot to take on the role of CEO at the department store chain JC Penney.

We reported back in November that he has been targeting ex-colleagues for JC Penney, and now Johnson has officially announced his plan in the form of a “Think Different” inspired ad.

Ron Johnson is highly regarded as the man who built Apple’s retail magic from scratch, and now he has set his sights on the decidedly uncool JCP to turn it into something amazing, and take on the likes of Macy’s and Nordstrom’s in the US.

His new ad, which reads like the extended manifesto Steve Jobs ran in newspapers upon his arrival in 1996, is like a sigh of fresh air, while signaling what’s to come — at least, that’s the affect the ad is supposed to have. 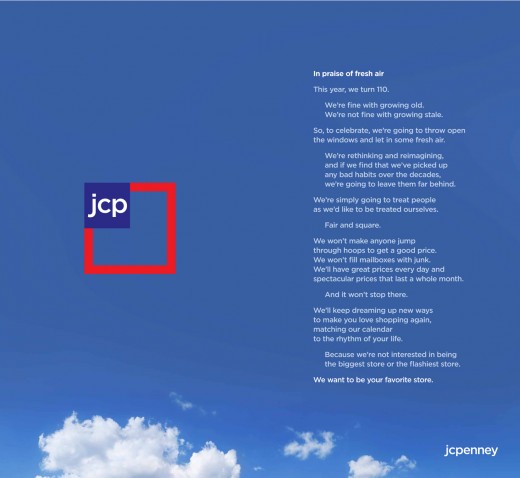 The new CEO plans to refresh the entire chain of stores with many of Apple’s signature traits, such as a highly simplified pricing structure. In a meeting with about 700 shareholders and media members, Mr. Johnson explained:

According to The NY Times:

Penney also announced a new spokeswoman, Ellen DeGeneres; a new logo (a red outline of a box with a blue box containing “jcp” in the corner of it); and a new designer partnership with Nanette Lepore, who will create a line of clothing for teenagers.

We’ll have to wait and see what happens with the company, but Johnson’s track record is on his side.