Mozilla has opened its latest ‘Moz Space‘ in London. The new offices are in the heart of the London’s tourist areas, nestled between Leicester Square and Covent Garden, so naturally it’s bustling both inside and out.

Situated on the 3rd floor, the space accommodates both Mozilla staff and visitors who need a place to work. Desigan “Dees” Chinniah is a member of staff known as a ‘Firestarter’ at Mozilla, “At the moment we have 15- 20 staff here and could expand to 60 – 70.”

The Moz Space is designed to be an open working environment where people can interact with Mozilla and learn more about what they do. It’s an interesting way for Mozilla to increase awareness while also recruiting volunteers and providing support for the open web community.

The office is divided into an area for the staff to work in and a large open room with access to a bank of power points, pigeon holes for kit and bags and a snack bar. There’s a corridor of glass cubicles where people can take smaller groups or work alone in a quieter environment and a balcony with seating that will no doubt be popular through the brief summer months in the UK.

“These areas are for use by anyone working on the open web, projects connected to Mozilla or anyone who’s within the web community who needs wifi, coffee and a chat,” says Chinniah. 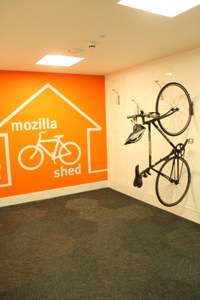 Moz Spaces are popping up around the world. Already Mozilla has opened two in San Francisco and Toronto. Currently under development are the offices in Vancouver and Paris with hopes to open up one in Berlin.

It’s refreshing to find professional work space that does not charge a heavy subscription fee to use the facilities. The staff are friendly and helpful and while the typically bright orange Mozilla furniture is cheerful, it is also well designed and would make a fair location for meetings.

Best of all is the welcoming approach,”It’s an open-door policy,” says Chinniah. “We open up the space for like-minded events, weekday or weekend events like bar camps. We’re all about the community and making the web better.”

Indeed the space is open to all sorts of similar minds, even those of the four-legged variety. If you’re lucky, you might get to meet the Mozilla staff canine there, Bowser. Though maybe “Browser” would be a more suitable name.