The App Store is littered with augmented reality apps, and it’s with good reason. The idea of projecting a virtual world into our everyday lives feels magical to almost anyone. Couple this with the ease of Apple’s app store and it’s no wonder this genera of apps has been selling like hotcakes.

But the innovations of augmented reality are just beginning. Someday, it could become a seamless experience, where you’ll look out into the world and intuitively filter through a mass of information to join the virtual world with your own interactive reality. Alas, for now we are limited to devices like the iPhone, which has been the platform for many interesting experiments in AR. Some are novel. Some are kind of stupid. But some are amazing, and offer up a glimpse at the future of gaming and entertainment. Here’s a look inside the world of augmented reality available on the iPhone.

Dimensions, the sonic adventure game by RjDj, might be the most innovative iPhone game you will ever play. It certainly is the craziest, most experimental game I’ve seen in recent years, let alone on a mobile device. RjDj, also the makers of Inception the App, insists that they “don’t do apps. They craft sonic experiences,” and they do a damn good job of it too.

But what makes this game so mind blowing is how greatly it deviates from the norm. Dimensions is part game, part soundtrack for your life and part science experiment. The gameplay happens right in the middle of your own life, and reacts to your surroundings. Learn more via their site and the video below.

Sky Chart and Star Walk are both amazing apps for anyone remotely interested in astronomy. Picture an immersive, interactive experience for staring into the stars — something that used to be impossible for me to do while living in NYC. Simply launch either app, turn your lights off and move around to learn about the constellations told in stories throughout our history, right from the sky. Both apps come with night vision settings for indoor and outdoor use, and Star Walk is particularly informative.

Colorblind Vision, created by Simon Strandgaard, is a simple yet informative app that lets you look at the world through colorblind eyes. The app includes all types of colorblindness, including Deuteranopia (green weakness), which occurs in 5% of males, and the highly rare Achromatopsia (full colorblindness). 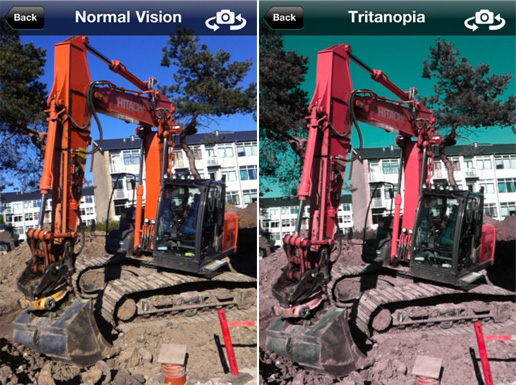 Sky Siege 3D takes a first person shooter to the next level. It lets you “experience an intense aerial assault in your own living room,” so expect to see enemy helicopters flying by your TV set. Overall, it’s a fun and novel way to take a peek at the way developers are playing with augmented reality. 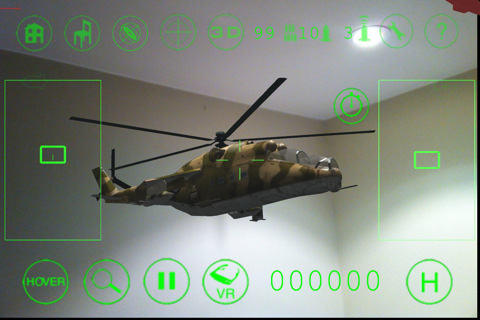 I have always loved Laser Tag, and now I can cary the game around in my pocket. Grab a friend, download the app and turn of the lights. The game uses your iPhone as your target and gun.

In two player mode, the other person’s phone will vibrate and look ‘damaged’ when they’ve been hit. At the end of the game your scores and stats will automatically show up on each other’s device.

In group mode, everyone should begin at the same time then compare hits, misses, scores, and achievements at the end.

We covered Cyborg Vision back when it was Terminator Vision at Hackday.tv. Haris Amin and Richard Cameron teamed up to develop this app using Face.com’s API. The app lets you detect your Facebook friends and view their information overlaid on a blood red screen. If you were worried about Google turning into Skynet, you can now rest knowing that a terminator-like experience is on the way. 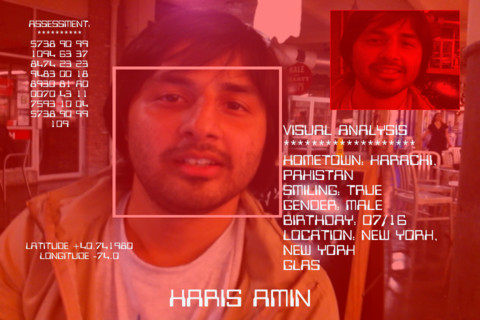 What do you think of augmented reality so far? Obviously, we’re a far cry away from hyper-realistic experiences, but do you think this is the future of gaming and entertainment? Let us know your thoughts in the comments below!