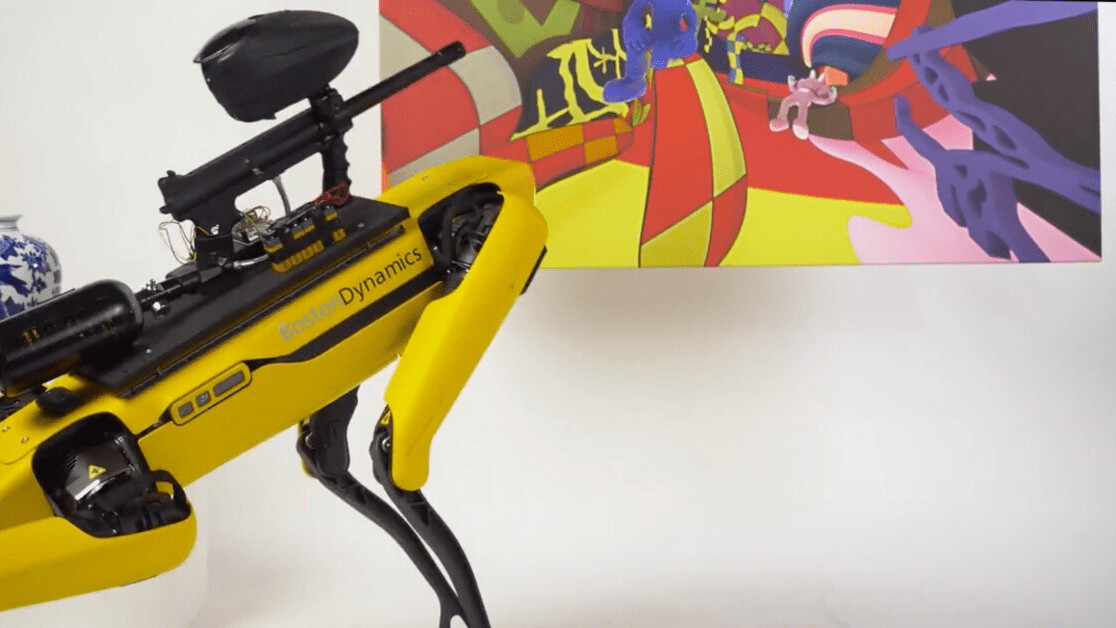 Spot the robot dog has found fame through viral videos of it dancing, delivering sneakers, and even herding sheep. But civil liberties groups fear that the quadruped could also be weaponised.

A new game aims to highlight the dangers of the Boston Dynamics bot by arming it with a paintball gun and dropping it in a gallery — and giving you the controls.

The project is the brainchild of MSCHF (pronounced “mischief”), a group of pranksters whose previous inventions include an app that recommends stocks for your star sign.

Spot is an empathy missile, shaped like man’s best friend and targeted straight at our fight or flight instinct. When killer robots come to America they will be wrapped in fur, carrying a ball… Everyone in this world takes one look at cute little Spot and knows: this thing will definitely be used by police and the military to murder people.

MSCHF’s track record (and name) suggests some surprises will be in store when the rampage begins on February 24 at 1PM EST. But the concept sounds cathartic as well as vaguely edifying.

The group says that people who download the MSCHF app will be able to remotely pilot Spot from their phones. Every two minutes, the controls will be passed to a new random viewer of the livestream.

Boston Dynamics told TechCrunch that it had initially considered working on the project, but backed out after finding out about the paintball gun.

The firm tweeted that the game “fundamentally misrepresents Spot and how it is being used to benefit out daily lives.”

The company’s irritation is unsurprising. Boston Dynamics has already been criticised for getting funding from military research agency DARPA and letting police test Spot. It would clearly rather people focused on the robot’s potential societal benefits.

However, the public denunciation will only draw more attention to a game that sounds like a lot of fun to me. I just hope it doesn’t deliver any unwelcome surprises.