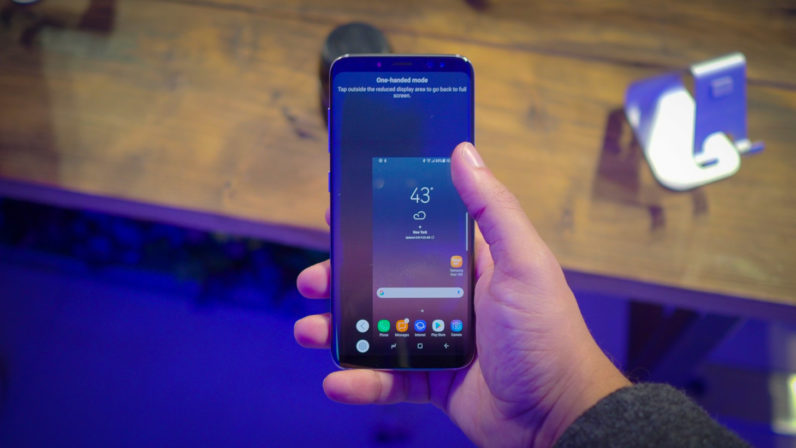 Here’s a common consumer conundrum: I like smartphones with big screens, but I also want to be able to use them with one hand.

Whichever quality you might prefer, the industry has certainly prioritized larger displays. When the original Samsung Galaxy Note was unveiled in 2011, it was considered almost comically huge. Fast-forward to 2017, and you might consider its 5.3-inch screen fairly small.

This wouldn’t be that much of an issue if we had more small phones to choose from, but options are quickly dwindling. The only current flagships that are truly usable with one-hand are pretty much the Google Pixel (arguably) and the iPhone 7 – and that phone doesn’t even get the Plus model’s superior dual-camera array. The S7 was also small relative to its peers, but then the S8 came around and made the screen a fair bit taller.

Thankfully, there’s a way around the problem: A one-handed mode that shrinks your display to a fraction of its true size. It’s a feature that has been available in skinned Android devices for several years, but as the average screen size pushes towards 5.5-inches, it’s time it became a lot more common.

Like our new president, I have pretty small hands. I can hardly reach the top of most phones without worrying I’ll drop them, and yet my daily driver is the LG V20 – a phone with a 5.7-inch screen. That’s because the V20 has the best one-handed mode I’ve seen.

Just swipe across the navigation buttons and the display shrinks. Better yet, you can adjust the size of this “mini-view” and move the entire interface to wherever best accommodates your specific reach. It makes the whole the device easier to use on the go than most smaller phones, and it’s why I was so sad to see the feature gone from the G6 (it’s narrower than the V20, but the screen is just as tall).

Activating the one-handed mode while rushing to a meeting and eating a bagel has practically become second nature; I use the feature at least a dozen times a day. It’s now one of the very first things I look for in every new phone I test, and its omission was enough of a deterrent to keep me from considering phones like the OnePlus 3T, ZTE Axon 7, and Google Pixel as my daily drivers.

Of course, there are other ways companies are trying to improve to one-handed usability, but in my experience, none have been as effective.

Both iOS and Windows Phone use a feature that pulls down the highest UI elements to about mid-height, but then obscures the bottom half of your display. Frustratingly, it means you have to reactivate it every time you want to tap something down there, not to mention all the information now obscured.

And while Apple and Google have both encouraged app developers to put crucial navigation elements closer to the bottom of your screen – not mention to the multitude of keyboards with one-handed modes – too often will I have to reach some dreadful hamburger menu on the top-left of the screen.

On the hardware front, Samsung and LG both reduced their bezels to a minimum with their latest devices – a trend we will see ever more often – leading to narrow aspect ratios that make the phones easy to grip horizontally.

But again, their tops are no easier to reach. I would’ve rather had a 5.3-inch-ish Galaxy S8 in a size smaller than the iPhone 7, but Samsung at least gets a pass for including a one-handed mode.

Maybe in the future, we’ll have the technology for expandable phones that can be as large as you need them to be. Or maybe humanity will end up growing carrot-sized thumbs. But until then, the onus is on manufacturers to make their phones easier to use with one hand; something as simple as a robust one-handed mode can go a long way.