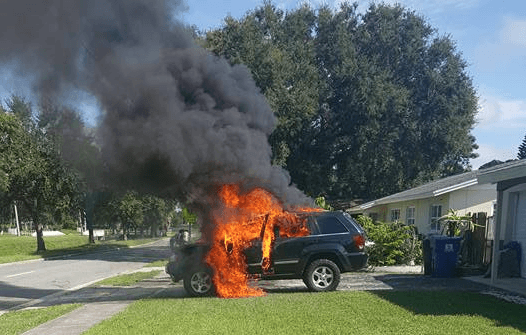 Following numerous reports of exploding batteries, Samsung might have a huge Galaxy Note 7 emergency on its hands as a man from Florida claims his phone blew up, setting his car on fire.

According to a report from FOX 13 News, the incident took place this Monday shortly after Nathan Dornacher and his family returned from a from a yard sale. The Note 7 owner left his device in the family jeep to move some furniture, but by the time he came back, the vehicle had already caught flames.

Firefighters were quick to put out the fire, but the but they still were too late, and the car was a write-off.

Commenting on the incident, Dornacher said in a Facebook post that his Note 7 was charging when the vehicle caught on fire.

Not the barbecue I wanted on my day off. We go to a garage sale to grab a desk for bonnie get back to the house unload the car leave it running ac on to keep the car cool we were planning on grabbing the dog and Bonnie and heading to petco, I head back out to the car to grab my phone which was on the charger (me and Lydia always fight over the house charger) go to open the door and see flames inside… open the door and it’s engulfed run inside to get extinguisher and of course not to be found yell at Lydia to call Fire Department and well here is the end result….

While as of now Dornacher has no definitive proof that the Note 7 set the jeep ablaze, he further said that “all signs are pointing this way.”

Samsung has since told FOX 13 News it is “aware of the incident” and “working with Mr. Dornacher to investigate his case.”

This marks the second Note 7-related incident following Samsung’s mass recall. Earlier this week another device exploded, causing over $1,400 in damages to a hotel room in Australia.

Read next: Dark Web crooks are selling fake degrees and certifications for the price of a smartphone