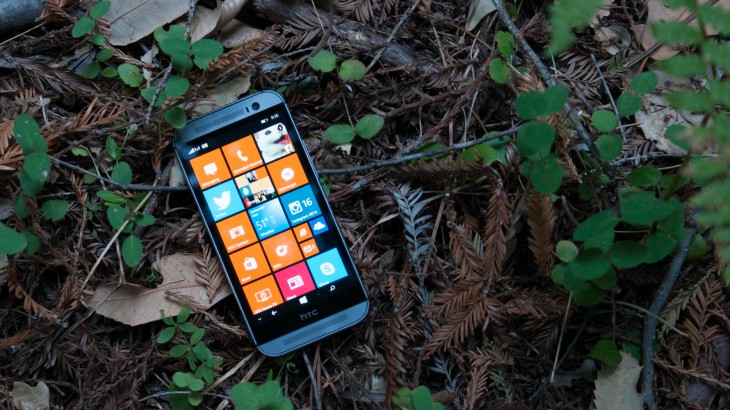 I really want to love Windows Phone. I want to be able to say that it’s on par with iOS and Android and say “wow, did you see that new feature that does that thing that no one else thought about?” Instead, I just like Windows Phone the same way you like a study partner or the guy who makes your burritos.

It’s a relationship that’s barely a blip in your life. Sure they seem new and different from all your friends, but at the end of the day, you don’t go out and have drinks with your study partner or burrito artist. Even if they are sporting a sweet new outfit.

The HTC One M8 with Windows Phone 8.1 is a spectacular piece of hardware with a great OS nestled inside. In fact, the hardware is exactly the same as the HTC One M8 for Android. Metal case, 2.3 GHz quad-core processor, 5-inch 441-PPI 1080p display, That’s good news for HTC, Microsoft and fans of the mobile operating system.

Thanks to the quad-core processor the UI is quick most of the time. I did encounter some stutters. But the screen looks gorgeous and having a metal case makes you feel like the phone could stop a bullet or at least look less like the plastic toys many smartphones resemble. Except for the Verizon, 4G LTE and Windows phone logos, it’s James Bond classy.

(Yeah, and on that note, please stop putting every logo on the back of phones. This isn’t Nascar.)

It also got the four-megapixel camera that’s meh at best especially when compared with the iPhone 5s or the Lumia 1020. It’s fine for Instagram, but the amount of noise found in photos means you’re less likely to use it to take your Facebook cover photo.

The battery life is on par with most smartphones. You’ll have to recharge it once a day if you want to do anything of value like checking your Twitter feed every 10 minutes.

But it’s not really about the hardware. Like your mom used to tell you, it’s what inside that counts. The HTC ships with Windows Phone 8.1 which includes Cortana, Microsoft’s answer to Google Now and Apple’s Siri. Cortana is as helpful as Siri, even more so sometimes, but it hasn’t hit that magical/creepy level of Google Now. Plus a lot of times it just pushed me to Bing search results. Not so much an assistant than someone using “let me Google that for you.”

When Instagram launched its app for Windows Phone it was (and still is) called Instagram Beta. That’s the app’s actual name. It still lacks video functions. Something that’s been available on iOS and Android for a while. Microsoft should not be pulling the same stunt as Instagram.

This late in the game, Microsoft needs to have stable releases out quickly. Not betas three years after the feature first hit the iPhone. Speaking of betas I ran into some weird issues with Microsoft’s implementation of onscreen buttons. Before February, if you wanted Windows Phone on your device you had to have hardware buttons. Microsoft removed that restriction and now we have an HTC phone sporting 8.1. But the software implementation proved problematic sometimes.

Sometimes the software buttons obscured app buttons that resided at the bottom of the screen. I would think that an app froze and never loaded the necessary navigation elements. Nope, they were hidden under the OS-level navigation buttons. Yes, you can tap the tiny down arrow on the navigation buttons, but the OS or the apps should be aware when they are blocking content needed to use an app.

The bigger issue is the apps themselves. The amount of apps people actually use is getting better but the quality of those app isn’t improving at the rate they are on iOS and Android. The Instagram Beta app is a good example. But it’s not the only one. The Facebook app is actually built by Microsoft and still looks like Facebook from two versions ago. Rdio hasn’t been updated since October 2013 and The Weather Channel app was last updated  November 2012.

There’s no Google Maps, official YouTube, Slack, Venmo, or Dropbox app. Yes, there are third-party apps that link to some of these services, but I don’t trust a random developer with my Dropbox login credentials. Even as the platform slowly gains market share, when a new app is launched, it’s either available for iOS and Android at launch, or an Android version is on its way. Very rarely is Windows Phone mentioned.

The HTC One M8 Windows Phone could be the greatest phone ever created (it’s not), but without a thriving ecosystem, it’s stuck in a sort of smartphone limbo. The ecosystem will get better if more people buy the phone, but people want a full ecosystem before they buy the phone.

Windows Phone 8.1 is a good step towards parity with Android and iOS. It has folders and a notification center and an “assistant.” But, Microsoft needs to move faster than those two operating system. That’s what happens when you’re late to the game. The Amazon Fire Phone looks to be dead in the water and who knows what’s really going on with BlackBerry besides square phones.

The HTC One M8 Windows Phone (half this article’s word count is writing that name) is a great phone for fans of Windows Phone. But it’s still in the acquaintance zone of phones. Maybe if enough of us can love the phone, even with all its quirks and weird issues, we’ll have a true third choice in the mobile market.

Let’s just hope this relationship works out better than that one with WebOS.

Read next: Tesla inks deal to build a network of charging stations for its electric cars across China