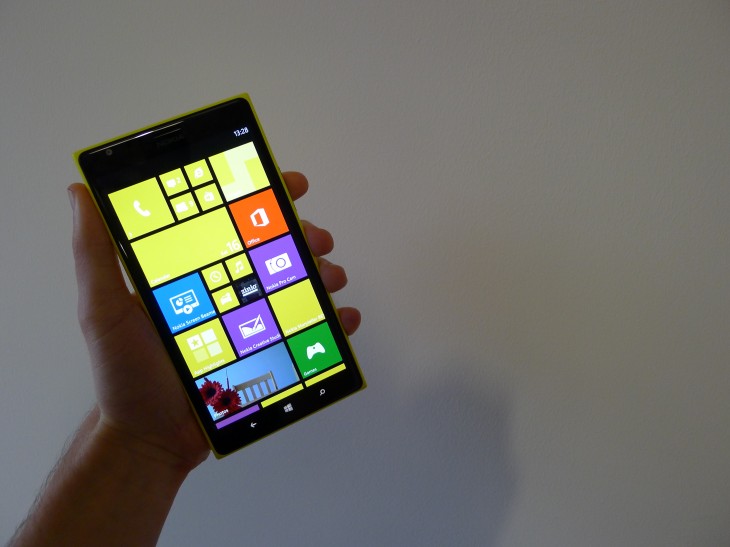 Nokia is saving Windows Phone 8 single-handedly. No-one else is supporting the mobile operating system in any meaningful way, which in turn is forcing the Finnish smartphone manufacturer to create a diverse range of handsets all on its own. It’s one of the reasons why Microsoft is so keen to acquire Nokia’s devices and services business.

The Lumia 1020 catered to photographers with its monstrous 41-megapixel camera, but its large form factor and smaller 4.5-inch display made it a niche product. Now, it’s targeting large-screen smartphone enthusiasts. The Lumia 1520 is a premium handset, with a sleeker design and the most impressive specs seen on a Windows Phone 8 device to date. The 6-inch display is enormous, but it follows the Samsung Galaxy Note 3, Sony Xperia Z Ultra and HTC One Max.

All three Android smartphones have their fair share of supporters, so it’s logical for Nokia to offer a similar device for Windows Phone 8. The specs certainly sound appealing, but is the Lumia 1520 enough to convert some of the Android and iOS faithful?

As with almost every other Nokia device, the Lumia 1520 is bold. The bright exterior can be seen from a mile away and the soft, rounded edges give it an inviting, playful look. No other smartphone manufacturer, aside perhaps from Apple, has created a design language for its hardware that is so consistent, fresh and instantly recognizeable.

At 6.41 inches tall and 3.36 inches wide though, it’s a huge phone that is guaranteed to attract attention. In this case though, it’s not for the right reasons. Admittedly, Lumia smartphones have always been eye-catching and in the past, I’ve taken great pride in carrying such stylish, creative and outlandish phones in my pocket. At this scale though, the Lumia 1520 is a little too loud. A little too boisterous. Whenever I took it out on the train or tube, other commuters would turn and snigger. It’s not a bad-looking phone, but the larger form factor gives it a comical, almost garish appearance.

At arm’s length it doesn’t look like a premium device, but thankfully the materials and construction tell a different story. The polycarbonate design is beautiful to behold and the plastic back is smooth, yet grippy in the hand. Unlike many Android smartphones, the Lumia 1520 doesn’t pick up any smudges or greasy fingerprints either. At times, I would find myself just running my index finger down the back of the device, hunting for a blemish that irked me in some way. Yet I always came away satisfied.

The Lumia 1520 is a tad heavy, weighing in at 209 grams and 0.34 inches thick. The added heft gives it a rugged flavor, but it’s also light enough to never feel overbearing. The device would’ve benefited from being a little lighter, but given you’ll never be carrying this in your pocket anyway, it’s a minor issue.

Nokia is fearless in its quest for bright, confident designs and that’s always aligned well with the bright, stark look of Windows Phone 8. On the Lumia 1520, that harmony is strengthened by Nokia’s new 6-inch, 1080p display. Simply put, Microsoft’s mobile operating system has never looked this good.

The screen is crisp and clear, giving live tiles, apps and media alike a degree of clarity and definition that just hasn’t been possible on the platform before.

In particular, the display is incredibly bright. By default, I usually set all of my devices to the highest setting, unless I’m using them early in the morning or late at night. With the Lumia 1520, the ‘High’ option was actually too bright for my eyes. Instead, I was more than happy to use the automated brightness adjustments and just let Nokia’s own software and algorithms take control.

Color representation and contrast is also outstanding. Nokia devices have always performed well in this regard, but on a 6-inch display the Finnish smartphone maker’s prowess is even more noticeable. The display is clocked at 367 ppi, but this is an incredible device for reading emails, browsing the web, editing photos – just about anything on Windows Phone 8, really.

The Lumia 1520 has one, fairly small rear-facing speaker. It’s surprisingly loud: While streaming some tracks on Nokia Music, I rarely needed to go above 20 (out of 30) in order to fill the room.

The speaker distorts frequently at the higher levels though. Taking a call with the loudspeaker is fine, but for streaming and media playback the Lumia 1520 falls short. Audio is shallow and tinny, creating an echo effect reminiscent of a church or other high-roofed building.

For watching movies or listening to music on the move, a decent set of headphones are essential.

Most Android smartphones have a terrible rear-facing camera. The Lumia 1520 wants to dethrone the competition with a 20-megapixel PureView sensor which, while lower than the Lumia 1020, is still far beyond most devices in its class.

Out of the box, the handset offers the Nokia Camera app – a combination of Nokia Pro Cam and Smart Camera – and the default Windows Phone 8 camera app. Their co-existence will be confusing to newcomers, especially given that the interface for both is pretty similar on the surface.

Regardless of which app you use though, the Lumia 1520 takes remarkable photos. It’s still a half-pace behind the Lumia 1020, but even so the final images outstrip anything I’ve seen to date from an Android handset. Comparing it to the iPhone is a much closer contest – the iPhone probably takes it by a small margin – but make no mistake, this is a competent shooter.

Photography enthusiasts will gravitate towards the Nokia Camera app though. All of the settings are accessible and easy to navigate using the semicircle of options that appear on the right-hand side of the screen. The icons could be a little clearer – some of the white balance and focusing options are pretty ambiguous, but after a few minutes of trial and error you’ll quickly work out what they all mean.

The camera could be a little faster too. Altering any in-app settings is ridiculously quick, but it takes a few moments to boot up when you hit the app icon or shutter button. I never missed an interesting shot this way, but it’s a noticeable delay.

As with the Lumia 1020, you can also zoom-in and reframe your shots inside the Nokia Camera app. It’s less useful and impressive on the Lumia 1520, given that the original files are recorded and stored at a lower resolution. Still, it’s a nice feature that newcomers can easily pick up.

Most of the photos that I shot were bright, detailed and accurate. England can be a terrible place for photographers (for at least nine months of the year it’s a pretty grey, miserable place) but the Lumia 1520 coped surprisingly well. Brightness and contrast were both solid, and it handles macro shots and shallow depth of field pretty effortlessly.

Focusing was a small issue. At full crop most images looked fine, but as soon as I looked a little closer it was clear that many of my images just weren’t as sharp as I had hoped. For sharing on Twitter, Facebook and the like that’s fine, but pro and hobbyist photographers should take heed.

The Lumia 1520 comes with Windows Phone 8 Update 3, better known as General Distribution Release 3. It adds a third column of Live Tiles to the Start Screen and supports up to six small icons along the width of the display. The result is an active and dynamic Start Screen which is more customizable and informative than its Android and iOS counterparts.

The number of pre-loaded apps is excessive though. When I booted up the handset there were no fewer than 36 apps already installed. Nokia and Microsoft are clearly trying to compensate for the poor selection of third-party Windows Phone 8 apps, but it would be wise to cut down on some of the bloatware.

While Microsoft’s default apps are still serviceable, it’s Nokia’s offerings that really showcase what the Windows Phone 8 platform is capable of. Nokia Storyteller is a highlight, wrapping up your photos, videos and Cinemagraphs in a slick gallery with pinch-to-zoom photo mapping,

Windows Phone 8 still lacks a decent selection of premium third-party apps though. The situation is beginning to improve: Vine recently debuted on the Windows Phone store, while Instagram, Flipboard and Path are all currently in development. Nevertheless, the range and quality of apps is still far beyond Android and iOS: Nokia is making a valiant effort to plug the gaping holes in Microsoft’s digital marketplace, but it just isn’t enough.

With the apps that you can download on Windows Phone 8, the Lumia 1520 really flies. Qualcomm’s quad-core Snapdragon 800 processor offers incredible performance across all aspects of the device. Windows Phone 8 smartphones have never needed the most powerful chipsets to deliver a world-class experience, but the Lumia 1520 is clearly benefiting from the extra muscle.

It’s smooth and responsive, juggling multiple apps and intensive tasks with ease. Scrolling and swiping through the Windows Phone 8 UI has never felt better either; outside of the photography department, consider this the new standard-bearer for Microsoft’s mobile operating system.

With a 3,400 mAh battery, you would expect the Lumia 1520 to last the better part of the day. The number of hours I managed to squeeze on each charge did vary depending on my usage, but it was always acceptable and within my expectations for a device with this sort of display and high-end specs. As always, it’s worth stowing your charger in case of emergencies. Most of the time though, I didn’t need to touch it to see out the day.

The Lumia 1520 is the best all-round Windows Phone 8 smartphone on the market. It’s blisteringly fast, the display is fantastic and the camera – while not up to the standards of the Lumia 1020 – still destroys almost everything aside from the iPhone.

The form factor is a sticking point though. The 6-inch display is huge and for most consumers, I think it’s a step too far for what should be a mobile, pocketable device.

As time went on, I began comparing the Lumia 1520 to 7-inch tablets such as the Nexus 7. The features offered on each device are wildly different, but I started thinking of them the same way as I organized my backpack or satchel each day. In short: “Do I want to pack the Lumia 1520, or a smaller smartphone and regular-sized tablet today?”

Nokia does a tremendous job of propping up the platform, but the truth remains that this is a third-place OS desperate for new apps. The ecosystem is improving, but so are the apps on iOS and Android. It’s a well-worn argument, but until Windows Phone 8 can catch up, it’s difficult to recommend the Lumia 1520 over its Android rivals.

Read next: Create your own fake London Underground service information signs with this simple app