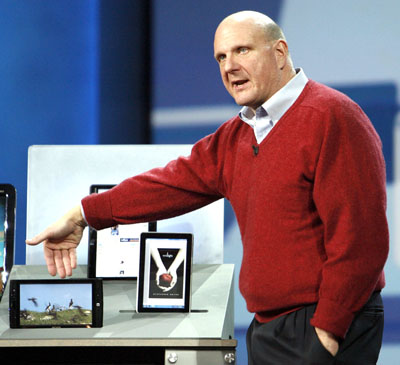 I think we can pretty safely say today could be labelled “tablet day”. No sooner had we posted some additional Samsung Galaxy Tab news when a leaked video of the much lamented HP Slate comes our way, a video which we obviously have to show you.

For those who don’t remember the HP Slate, this is the device that was initially doing the rounds back in April, only to be swept up in a storm of WebOS tablet reports, before getting the demo treatment by Microsoft’s own Steve Ballmer.

Moving on, a video has emerged by way of Gizmodo, that shows the Windows 7-powered HP Slate in action. It’s thick, light and you could say looks “durable”. Finished on the reverse side with rubber, the HP Slate has a number of different buttons on the sides and top of its body, great for the business users the tablet is ultimately aimed at.

In my opinion, Windows 7 still doesn’t have enough about it to make a Microsoft tablet appealing to me. I’m sure this may find a place in the market, it’s light and it is accessible, perfect for corporate IT departments who are looking to outfit staff with a device that runs an OS with a proven reputation.

Read next: Should one joke tweet ruin a man's life?