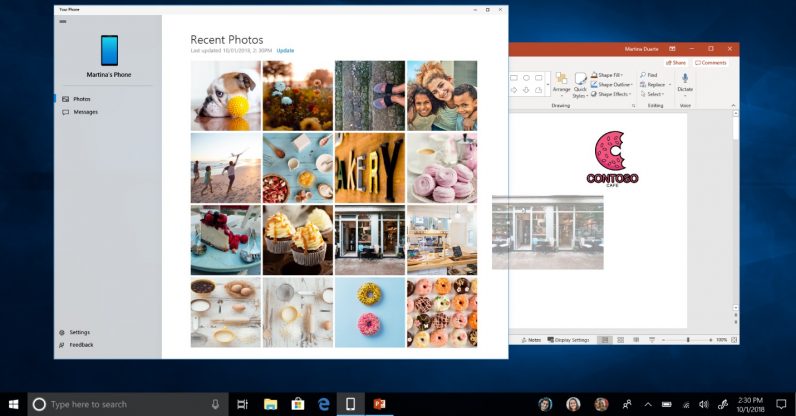 At today’s Surface event, Microsoft revealed that this month’s Windows 10 October 2018 Update is now available to download, and it includes a plethora of new features. You can read all about it on Microsoft’s blog post here, but we’ve gone ahead and distilled some of the best changes for you.

One of the features we anticipate using the most is Cloud Clipboard, a big overhaul which allows users to finally copy multiple things, as well as share said copied text across multiple devices.

This new Clipboard lets you store some items, including text and images, eliminating the need to constantly copy the same thing. It’ll save your history of clipped items, and you can pin the ones you use the most; simply do press Ctrl+V to bring up the menu. Our own Napier Lopez tested the feature in May, and found it quite useful, though keep in mind you’re limited to 1MB per item.

Microsoft’s also adding a more versatile screengrab function to Windows 10. Previously, it introduced the Screen Sketch tool in the Windows Ink Workspace with a prior version of Windows 10, while keeping the Snipping Tool that’s been around for years. Now Microsoft has an all-inclusive tool called Snip & Sketch that exists as a proper modern app. It lets you set a timer, draw on your images, or crop to different shapes. And since it’s now a modern app, it’s a lot easier for Microsoft to add features in the future. You can access it by pressing Windows key + Shift + S, but it can also be set to work with a button on a stylus, through the Windows action center, or by pressing the Press Print Screen button. As it’s a new feature, Microsoft is still keeping the original Snipping Tool around, but will phase it out once its “data and user feedback indicate people don’t need both experiences.”

The Search tool is also getting an upgrade, in that users will now automatically get a preview of all results in search, including documents, emails, and files. The Home screen also now saves your most recent activity, so you can “Pick Up Where You Left Off.”

In the same category, Microsoft’s Timeline, which allows you to find files, emails and documents in a saved chronological order on your computer, is coming to phones too. The app is available to preview today for Android users, and is coming soon for iOS users.

Another favorite is the Your Phone app, which allows users to access their Android’s texts and photos from their computer. You can edit photos directly from the app without having to transfer them from one device to another, and you can also text from the app. This is mostly for those with Android 7.0 or above, but a limited version will also be available to iOS users. According to Microsoft, you’ll be able to move a webpage from your iPhone to your desktop more easily. And in a future Windows update, you’ll be able to mirror your phone’s screen completely.

Oh, and Microsoft is also pushing out 157 new emoji, including a llama, a raccoon, superheroes, and the ever-underrepresented redheads. So if you were waiting to add those to your Emoji Dashboard, you’re getting them too.

It’ll also apparently add Dark Mode to the File Explorer, and unlike my colleague Callum, I actually love Dark Mode. Meanwhile, Edge has a variety of new color themes for you to customize appearance to your liking.

Check your PC’s updates if you want to get the upgrade today. Otherwise, Microsoft will push it out to everyone starting October 9.

We’ve only scratched the surface. There’s much more in the Windows 10 October 2018 Update, including new features for Outlook, Edge, and Office too. Head on over to Microsoft’s blog post at the source link below if you want to find out more.