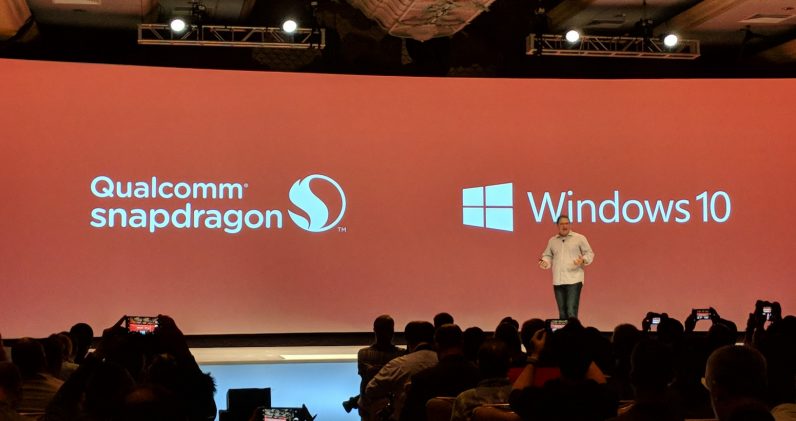 A couple of days ago, Qualcomm and Microsoft announced they were collaborating on a category of computer called the ‘Always Connected PC.’ In other words, a PC that behaves more like a smartphone. That could have potentially massive implications for the way we use our computers, but there are some important drawbacks as well.

Let’s break it down.

What exactly is an Always Connected PC?

The ‘Always Connected’ bit is basically a marketing term Microsoft is using for a new batch of Windows PCs running on processors with ARM architectures – the same type of super-efficient chips on our mobile devices.

These PCs will have two primary claims to fame over the ‘x86’ type processors in current PCs: constant cellular connectivity, and ridiculously long battery life – over 20 hours on a charge. For comparison most Windows Ultrabooks are in the 12-hour range.

In particular, the company is partnering with Qualcomm, which makes the processing platform used in the vast majority of Android devices, including the Snapdragon 835 in the Galaxy S8/Note 8 (in the US), the Pixel 2, the OnePlus 5, the LG V30, etc.

It’s possible the company might work with other ARM partners in the future, but Qualcomm is getting the first go at it. The first couple of Always Connected PCs will use the same chipsets as those phones.

The idea is that by combining super-efficient processors with constant connectivity, PCs will be as convenient as our smartphones. With battery life over 20 hours, you won’t ever have to think about carrying a charger. Like your phone, they’ll instant wake from sleep. With constant LTE connectivity, you won’t have to scramble to find a hotpost.

How is that different from existing PCs with cellular connectivity?

Let’s be clear: Always Connected PCs won’t do anything you can’t already do with existing PCs, and there are already plenty of PCs on the market with constant LTE connectivity. But they might do some things better.

The smaller and more efficient processors allow for bigger batteries with lower power drainage; think of how powerful and efficient our smartphones are. It also means computers could get smaller and lighter while still providing solid battery life.

Meanwhile, Qualcomm is already a major player in the mobile industry with major clout with phone carriers. That combination of factors could mean that cellular connectivity on PCs will become the norm, rather than a niche.

On a related note, it’s not clear whether the Always Connected PC branding will be exclusive to ARM processors, or whether they will apply to Intel and AMD chips that meet certain criteria.

What are some models on the way?

So far, only two Always Connected PCs have officially been announced: The Asus NovaGo and the HP Envy X2. Qualcomm said Lenovo would be announcing its own entry at CES in January.

We went hands on with the Asus and HP models here. But TL;DR – they’re typical 2-in-1s, except with the promise of incredible battery life. Of course, we need to put those claims to the test once the devices start shipping next year.

The first batch of Always Connected PCs are expected to launch in Spring of 2018, so you have some time to prepare your wallet.

Will they be able to run regular Windows programs?

Yes, but with some restrictions. The two PCs mentioned above come preloaded with Windows 10 S – the version of Windows limited to apps from the Microsoft Store.

Always Connected PCs should be able to run any apps available on the Microsoft Store, but that’s still a pretty limited selection. In my very brief testing, these seemed to run as smoothly as the typical Ultrabook.

Should you upgrade to Windows 10 Pro or Home, you will still be able to run most traditional software, so long as it comes with a 32-bit (x86) version. Software that are exclusively 64-bit will not work (unless it was designed specifically for ARM processors) but those are pretty rare. According to a Microsoft Spokesperson:

However – and this is an important caveat – it remains to be seen how well x86 emulation runs. You should be able to run Photoshop, for instance, but we can’t say how smoothly it will run until we can spend more time with an ARM-powered device.

Lastly, there’s the simple fact that these are still mobile processors at the end of the day. It’ll be a while before we get Always On PCs that can match the performance of high-end Windows Laptops.

Unless your laptop has truly marathon battery, chances are you take your charger with you for all but short outings. Chances are you’re constantly struggling to find an internet connection unless you’re at work home.

Always on PCs could change that. We’d start to treat our computers more like our phones, generally not worrying about power or connectivity. For Microsoft, that means you’ll be taking your PCs to many more places.

Again, PCs with LTE connectivity and solid battery life already exist, but Qualcomm and Microsoft are doubling down on the concept. Over the next few years, it could very well become normal to get a cellular plan for your PC to go along with your smartphone – or perhaps even sharing a plan. The move will also likely push Intel into producing even more efficient and powerful processors. Competition fosters innovation.

Read next: ProtonMail Bridge is an accessible encryption solution for Apple Mail, Outlook, and Thunderbird