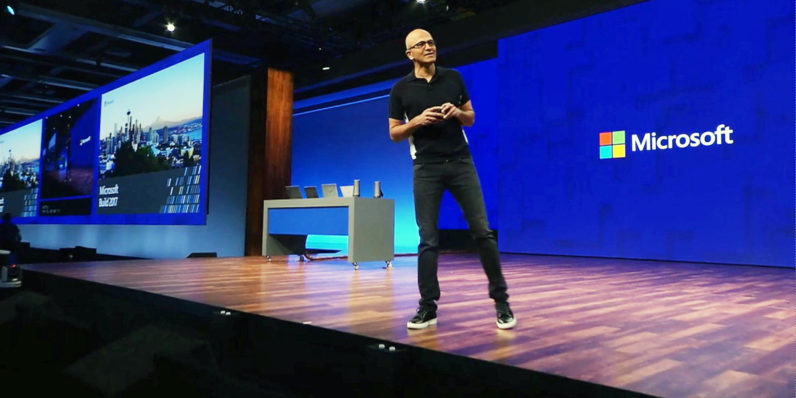 Today in Seattle, Microsoft kicked off its annual developer conference, Build. Build is a conference by developers, and for developers, so we don’t get the consumer-facing technology at the same scale as other dev events, like those from Google, Facebook, and Apple, but we still have plenty of cool stuff to talk about.

Here’s what you missed.

Microsoft originally set the goal of reaching 1 billion devices by mid-2018, a goal it appears unlikely to hit. That’s not to say growth is stagnant, as the company has now added over 100 million users since hitting 400 million back in September. Hitting a billion in just over a year, however, seems unlikely.

Read: Windows 10 is now on half a billion devices

For the 100 million Office 365 users worldwide, this innovative new translation tool should prove to be a boon to the business community. With PowerPoint being the most-used application for delivering these sorts of presentations, the ability to write a presentation in English, in San Francisco, and use the same presentation — without professional translation — in Beijing, is really unheard of.

Read: Microsoft PowerPoint can now translate your presentations on the fly

Andrea Carl, Director of Commercial Communications at Microsoft today demoed how smart AI could one day make the workplace safer. Using the Azure stack, Azure IoT Edge, Microsoft Cognitive Services, and specialty cameras, to detail how artificial intelligence could one day save lives by predicting accidents — and alerting you to these possibilities — before they happen.

In the demo, Carl showed how a jackhammer, when stored standing up, against a bench, was a potential accident in wait. The AI recognized this hazard, and alerted a nearby worker that the jackhammer was being stored incorrectly. He then laid it down on its side, a much safer way to store the tool.

Next, we saw Carl pull up all non-employees on a job site. Using facial recognition, the AI recognized those in the system as employees, and pulled those it didn’t have a record for anyone (with access) requesting the information. From there, Carl could see the new hire, add a profile for her to the system, and set permissions for what she’s allowed to do — like handle a jackhammer. If an unauthorized person is handling a piece of heavy machinery, the system alerts nearby employees.

The implications here are incredible, and it’s not hard to see how this could make construction sites, manufacturing facilities, and any number of other dangerous jobs safer.

After promising it back in December, Microsoft today delivered on its promise to allow developers to create new skills for Cortana. These skills allow Cortana to listen for, and understand, new commands on any device capable of running it — hubs, mobile devices, or laptops.

Better, Microsoft says developers can reuse a lot of the code they’ve created for Alexa, or the Microsoft Bot Framework.

With 141 million people using Cortana, developers have a lot of motivation to create some really cool new functionality for Microsoft’s smart AI assistant.

Microsoft releases Visual Studio for macOS to everyone

After first promising it back in November, today Microsoft announced Visual Studio was rolling out to the general public (it was formerly in preview). The release is an important one, as it signifies Microsoft’s vision to support developers, no matter where they write code. It follows up the release of a Linux terminal on Windows last year.

Visual Studio is a popular IDE, and although it’s generally been used for Windows apps, it’s making huge strides to work on mobile (with the addition of Xamarin), and now other desktop platforms like macOS and Linux.

One of the most exciting of these announcements was the release of two new mobile apps — iOS and Android — to help manage applications using Azure. It’s unlikely you’ll be doing a lot of dev work with a mobile app, but the ability to check real-time analytics and error reporting, as well as restarting and provisioning virtual machines gives devs a top-down view of all they need to know, while on the go.

Which, as Hanselman said, should in no way impact personal relationships.

AI will undoubtedly disrupt entire industries over the coming years, and some of the groundwork is already in place. One of the tools worth getting excited about is Microsoft’s Cognitive Services.

Typically, training an AI models takes days (sometimes weeks or months) even for relatively simple tasks. Today, Microsoft announced Custom Vision, a tool that lets you create sophisticated computer vision applications with minimal training. Creating your own custom vision API models now requires only a sample of training data — as few as a couple dozen photographic samples — to train the model. This could significantly speed up development time, and help usher in a new world dominated by AI.