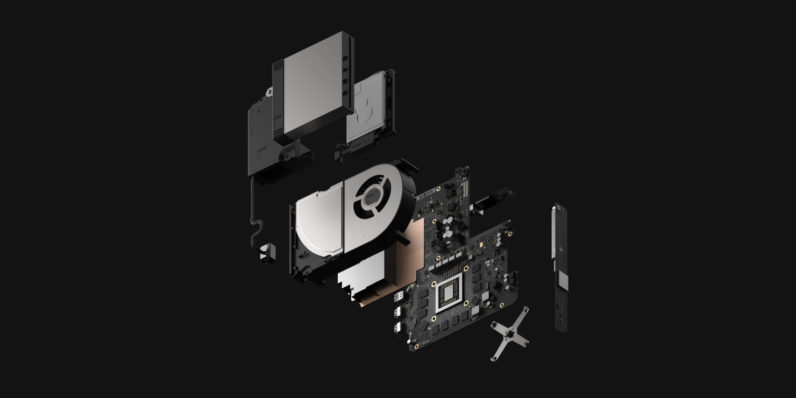 In an interview with Microsoft’s Xbox chief Phil Spencer, you can see the all-white Project Scorpio dev kit bears some resemblance to the Xbox One S, but with a few differences and additional design considerations to make it dev-friendly. It’s likely that the production model for consumers will look something like this when it finally launches.

The dev kit version comes with a display on the front to show performance data for games that are being tested, such as frame rate. It also has three extra USB ports in front, and vents on the back and sides to allow for stacking multiple units on top of each other.

Under the hood, the dev version features an improved GPU that manages 6.6 teraflops as compared to the consumer edition’s 6 teraflops. There’s also 24GB of GDDR5 RAM – double that of the production model; a 1TB SSD and a bigger PSU round out the package.

Another perk for devs is in the inclusion of a high-speed transfer cable that allows them to beam their game builds at a blinding 25GB per minute to the console, making it a lot quicker to begin testing.

It’ll be interesting to see how much the consumer model resembles the dev kit that Microsoft is willing to show off this early in the game. I wouldn’t place any bets just yet, though: the company will reveal Project Scorpio at E3 in Los Angeles on June 11. The expo is opening up to the public for the first time ever this year, so this might be a good reason to make the trip.

Microsoft first teased Project Scorpio back in May 2016 and has only recently begun opening up to talk about it. In addition to revealing its specifications that peg it as the most powerful console ever made, it’s also getting support for mixed reality content and will work with a headset to deliver immersive experiences.

Read next: Google is building a job platform for recruiters