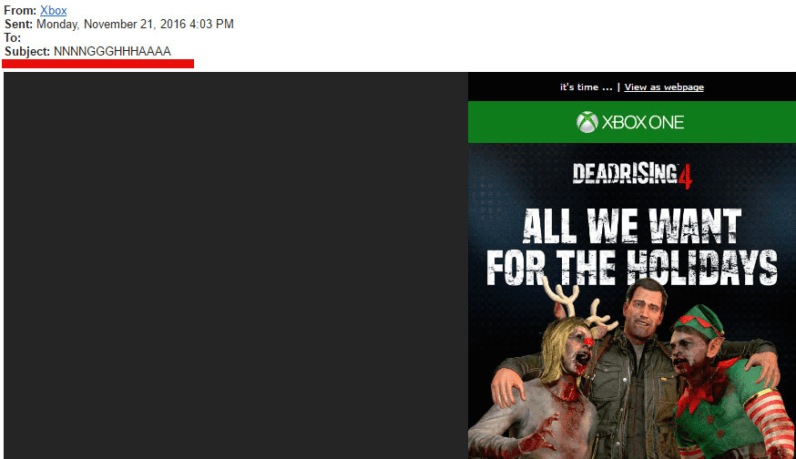 Yesterday, Microsoft had a minor mishap when it inadvertently sent out an Xbox promotional email headed with the racially dubious subject line “NNNNGGGHHHAAAA.”

While the email, advertising the upcoming fourth instalment of open-world zombie apocalypse game Dead Rising, was obviously intended to be read and pronounced as a stereotypical zombie growl, it looks dangerously close to the ‘N-word.’

This has prompted  Microsoft to issue an apology before the message has insulted someone.

In the contrite, the Windows-maker clarified the email wasn’t intended to be offensive, but also took a chance to acknowledge it could’ve phrased the subject line differently to avoid the issue altogether.

Here’s what company PR rep Larry Hryb had to say:

Today we sent a DR4 email where a zombie roar was interpreted by many as a racial slur. We apologize and promise to do better next time.

I was like ‘What did that zombie call me??”

I think if you interpreted "NNNNGGGHHHAAAA" – the title of an email sent about Dead Rising 4 – as a racial slur, that's really on you.

This isn’t the first time Microsoft has gotten into trouble for its unusual email marketing strategies. Previously, the tech giant was viciously mocked after sending out an email invite for one of its recruitment events that contained phrases like ‘hella nom’, ‘lots of dranks’ and ‘getting lit’ – you know, stuff real millennials say.

The good thing is that unlike its recruitment event invitations, the language used in this particular Dead Rising promotional email was a complete accident.

Read next: Huami launches its Amazfit PACE smartwatch in the US