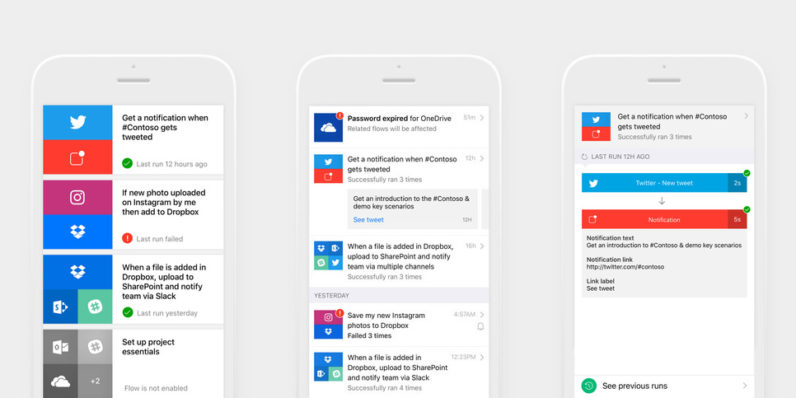 At the end of April, Microsoft revealed a preview of Flow, an automation tool that connects productivity apps and triggers actions between them, similar to IFTTT and Zapier. For example, you could set it to notify your team on Slack when you’ve added a file to SharePoint.

When it launched, Flow was only available on the Web. The company has now released an iOS app so you can manage Flows that you’ve previously created online, and receive notifications when they are triggered.

There’s also a feed that shows you a history of all your Flow actions. However, you can’t create new Flows through the app.

Do you need Flow? Well, it might be of use if you’re tied into Microsoft’s productivity suite and collaborate on its tools with your colleagues. It works with Office 365, SharePoint, and 34 other apps like Salesforce CRM, Slack, GitHub, Twitter, Google Drive and MailChimp.

And while it’s in testing, you’ll only be able to sign up with a work email account (basically from a domain that’s not gmail.com or outlook.com) to try it.

Flow does what it says on the tin and it’s Microsoft’s way of trying to accommodate the needs of every kind of customer that uses its productivity apps.

But if you use a wider range of apps and want more flexibility for things like controlling your smart home gadgets and saving Reddit posts to Pocket, you’ll want to give Zapier or IFTTT a go.

TechCrunch notes that Microsoft is building more features for its new service, including the ability to create flows through the app. It’s also working on an Android version.

Microsoft Flow on the App Store

Read next: Microsoft is experimenting with creating links to every screen in your mobile app