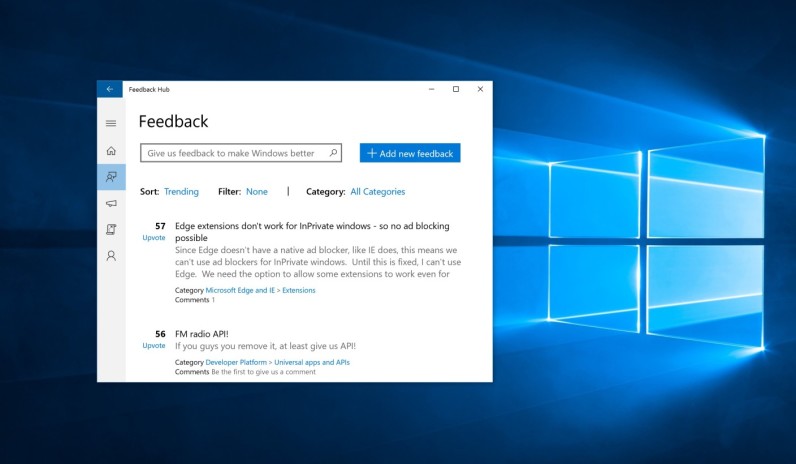 I like Windows 10. Not everyone feels the same way though, so Microsoft is making it easy for anyone to complain – or you know, provide constructive criticism.

Windows 10 users can now download the Feedback Hub app from the Microsoft Store on both the desktop and phone version of the OS. The app was previously available to Windows Insiders – feedback is the whole point of beta testing – but making it available to its entire swath of users is a notable step forward.

The Feedback hub lets you report a problem or make a suggestion. You can also categorize what your feedback is for – Start Menu, Networking, Microsoft Edge, etc – and append images for more detail.

Of course, with over 270 million active users, there’s bound to be repeated comments, so Microsoft provides a list of trending feedback. You can upvote these posts Reddit-style, and you can also filter the feedback by category.

It’s a welcome update. After all, the opinions of everyday users matter just as much as those of insiders – especially with Microsoft calling Windows 10 the last version of Windows ever.

There’s also likely a smaller swath of nerdier users who keep up with upcoming Windows 10 features, but don’t want to deal with the hassle of installing buggy insider builds, or don’t have a second computer for testing safely, so this lets them contribute too.

Microsoft has had a decent record of implementing insider feedback fairly quickly, but it’ll be interesting to see how much it listens to its less tech-saavy users. If you want to give it a go, you can download the app from the Windows Store now.

Read next: Humanity has gone too far with an automated 'wind-effect' selfie-stick