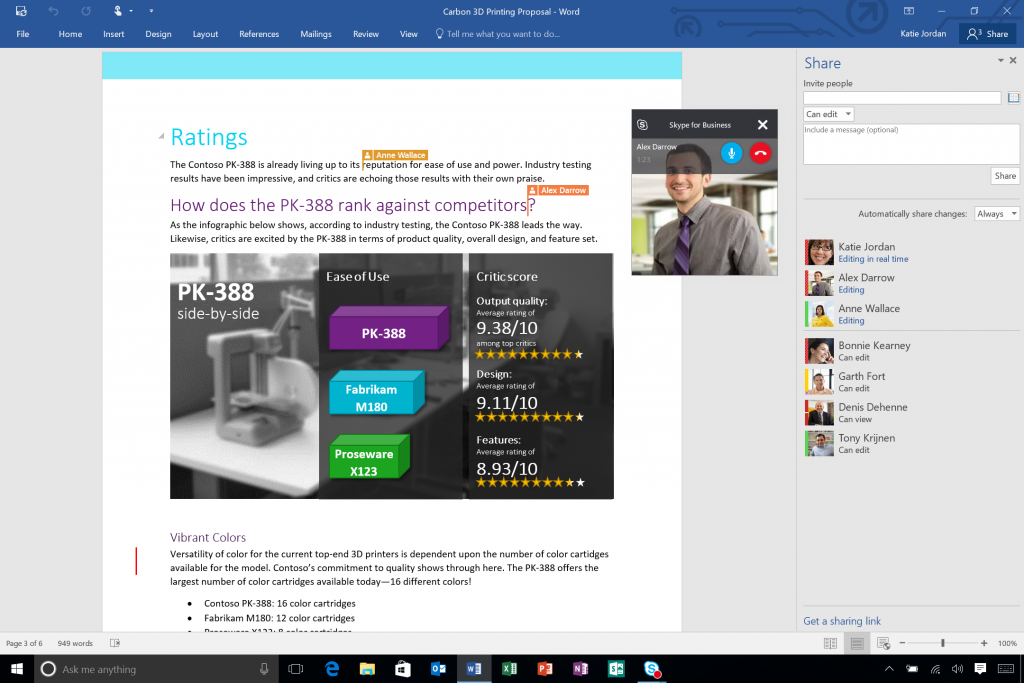 Microsoft’s latest release of Office is out today and it drags the company’s productivity suite kicking and screaming into a future that’s changed dramatically since the last release.

Microsoft added real-time co-editing to its Web apps all the way back in 2013 and has finally added it to the desktop app so you can collaborate without opening your browser.

Skype for Business is now integrated into the apps so you can video chat, instant message or share files within documents themselves.

It’s received a visual refresh to be much flatter and more colorful than before, with title bar colors for each app matching the icons now. Word is blue, Excel is green and so on.

Office 2016 also adds search and integrates with Cortana to provide contextual results. You can ask about your calendar for the day, search in documents and more.

Outlook received a number of improvements too, with a new Office 365 Groups feature allowing you to see shared inboxes, calendars and notebooks within the app and the app has received a big performance bump for ‘live search’ which is much faster.

A new app, called Office 365 Planner is included with Office 2016 which is a task tracking style app in the same vein as Trello, for getting projects done on time. Planner provides visual dashboards, email notifications and helps keep your team up to date with each other’s process — the app won’t be available from day one, but will roll out next quarter.

Most of all, Office 2016 is optimized for Windows 10 and works with Microsoft’s new ‘Continuum’ mode that lets Windows 10 phones act as desktop PCs.

Office 2016 is out for both Windows and Mac from today. If you have an Office 365 subscription you can upgrade by following the steps here.

You can buy it outright if you’re a student or business, but Microsoft is pushing home customers toward the new Office 365 monthly plans, which receive continuous updates.